A Rowhouse Bathroom Remodel: Before

Where can you go to get ideas and inspiration for a home renovation? Just check with your neighbors. While thinking of how they’d like to remodel their rowhouse bathroom, these homeowners took notes during the Del Ray House and Garden Tour, admiring the many creative tiling options in bathrooms around the neighborhood. After much thought, they decided to stay true to the era in which their home was built, but to update the tile and make other improvements. We stopped by to check out the bathroom before it gets its makeover.

They say they’ve always hated this “weird pattern” in the floor tile that doesn’t line up with either toilet or sink, but they like the black-and-white theme. It’s become much more of a challenge than they had anticipated to get tilework done the way it looked in 1939. 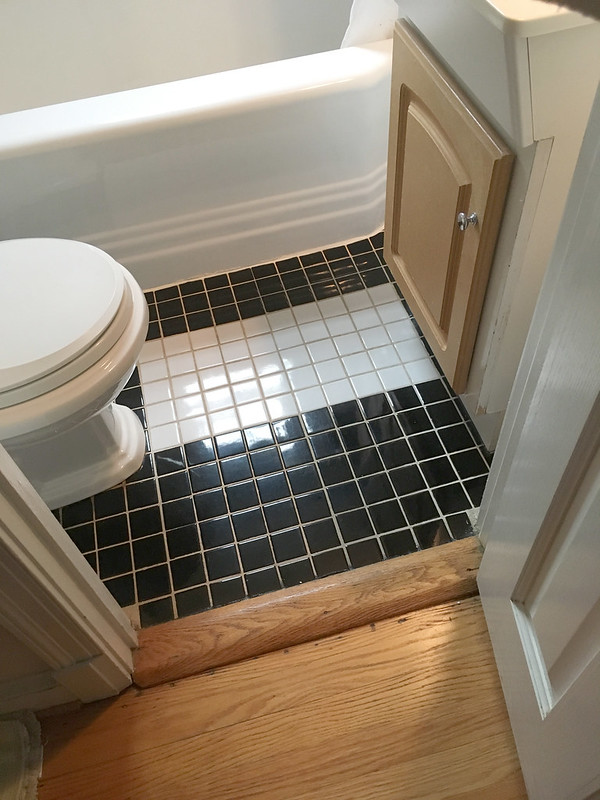 They look forward to choosing a new color for the walls once the room has been rebuilt, after being taken down to its wood laths. An exhaust fan will be installed to help cut down on the mold and mildew, and the new window will be framed in tile rather than wood. The real challenge was to find the same white square tile and black mudcap tiles. The homeowners decided on white 3 x 6 inch subway tile to echo the bricks on the outside of the wall. They found the black mudcap and other trim pieces online at Subway Ceramics.

They will also replace everything in the room. The existing tub has been covered by a vinyl liner for 15 years; the original surface is no doubt marred. There is also water damage underneath. 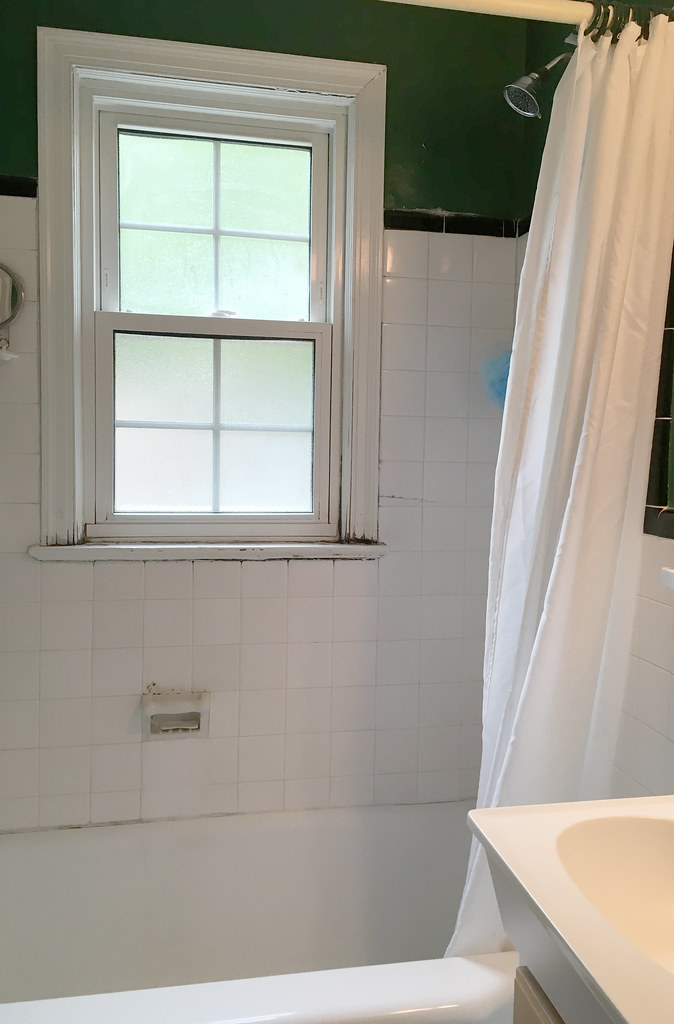 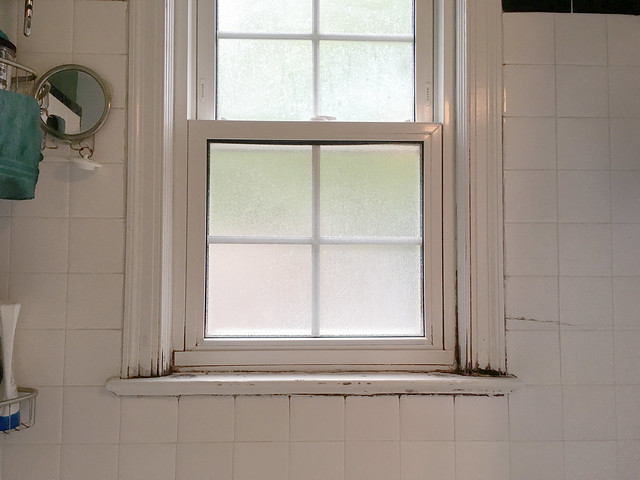 They considered tiling all the way up the walls to the ceiling, but learned from a neighbor that it might be better to do a partial wall of tile. Tiling all the way up reveals that the room is not perfectly straight. These old rowhouses have settled quite a bit. They also noted that small bathrooms tend to seem smaller when they have that much tile. Speaking of a house settling, this crack – common in older homes – may have occurred as a result of the house settling over time, although it may also have something to do with plumbing repairs. 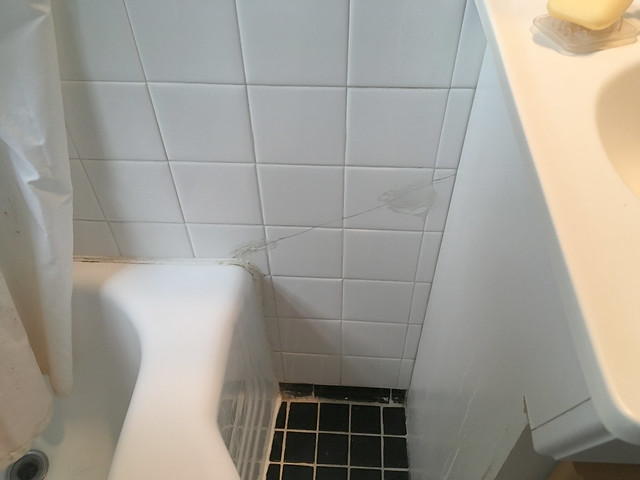 The (not original) sink will be replaced by a Kohler wall-mount; this was the trickiest piece to find, since there are only 15 inches between the wall and the door frame. The new one will come out 17 inches from the wall, and since there is no cabinet or pedestal underneath, there will be plenty of legroom. 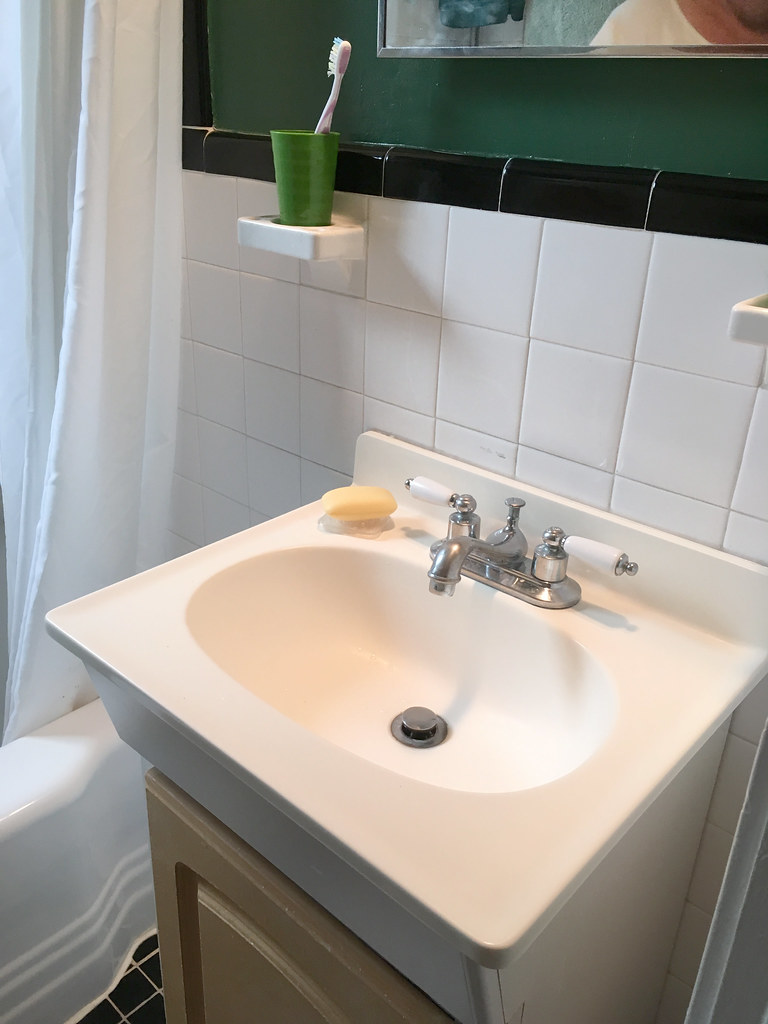 The towel rack is glued to the tile; a new pair of towel rack brackets has been ordered from Subway Ceramics, set into 3 x 6 inch tile. 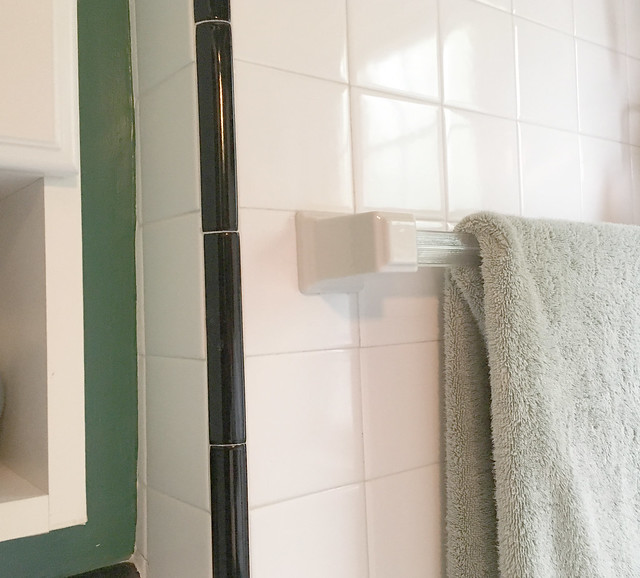 The homeowner likes the mermaid art and plans to incorporate it into the new bathroom. 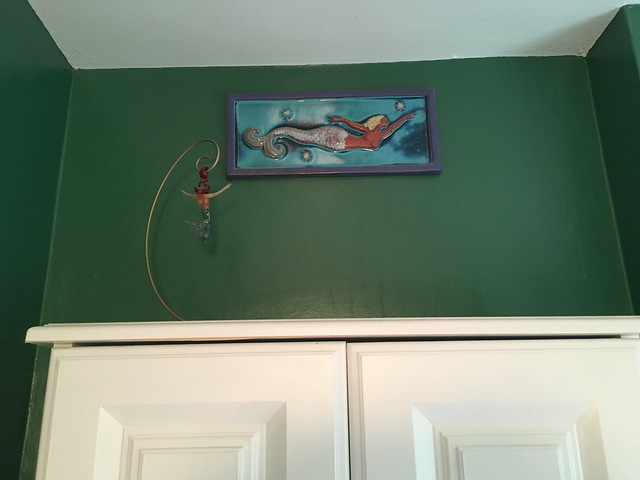 She’ll keep the charming mermaid pulls on the cabinet to use with the new custom-made cabinet. There will also be a bit more storage available in the new mirrored medicine cabinet, since new ones tend to be taller than the older ones. 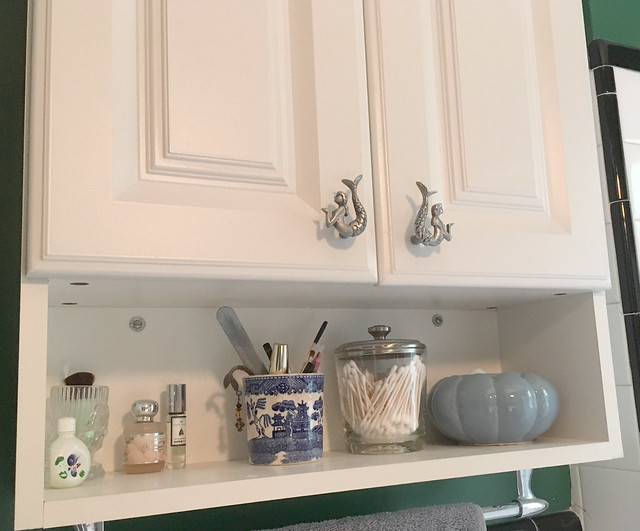 The contractor has pledged to keep as much material from the demolition as possible out of the landfill; he will pass on reusable bathroom elements to Habitat for Humanity Restore or similar.

The work should be done in a few weeks and we’ll be back to see how it looks!