At first glance, Charles and Brandy’s kitchen seems like it doesn’t need much work — white cabinets, wood floors, built-in shelving, clear sight lines to the living room. Sounds pretty good, right? But upon closer look, you realize there are deeper issues that need to be addressed to make this a more functional space for their family.

Here are the before shots of this 1950s Warwick Village rowhouse and a peek at what’s planned in the weeks to come. 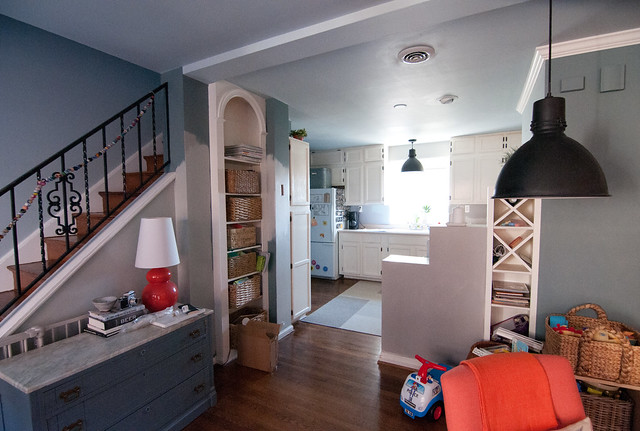 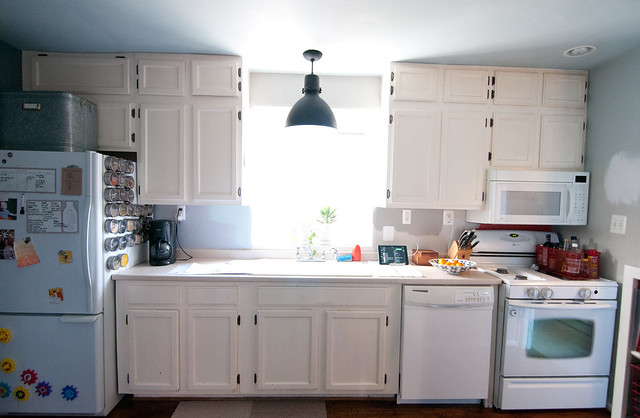 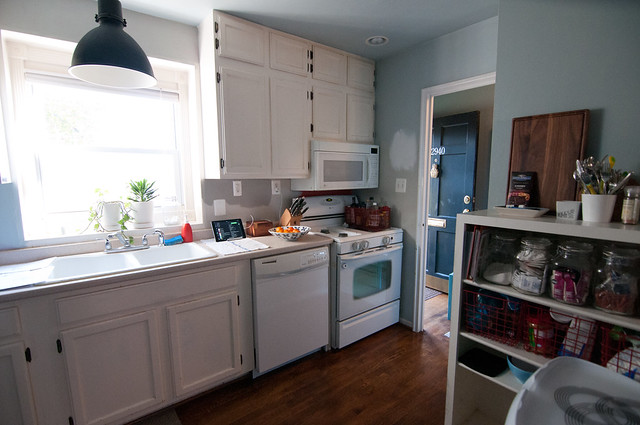 First on their wish list is more counter space. Right now, I’d guess there’s about 24 inches on either side of the sink and when you add a coffee maker, knife block or any other kitchen equipment, prep space starts to disappear. 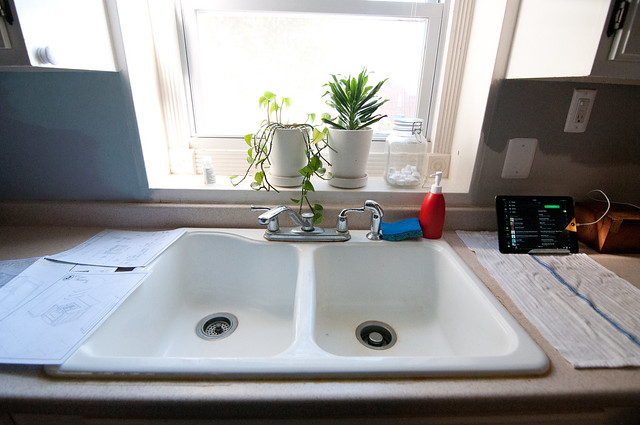 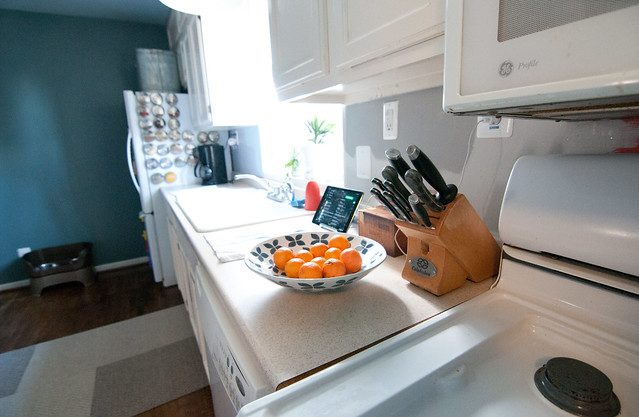 To remedy this, they plan to move the stove to a new peninsula between the kitchen and living room, creating a full wall of counter space along the front wall.

More important, replacing the stove is actually a safety issue. It’s been months since they’ve been able to use it as it leaks carbon monoxide. Without a working stove/oven, they’ve been using an electric skillet, microwave and their outdoor grill to cook food.

The fridge will pivot 90 degrees counter-clockwise (where the dog bowls are currently located). This will also help expand the counter even more and make use of wasted space on the blank side wall. 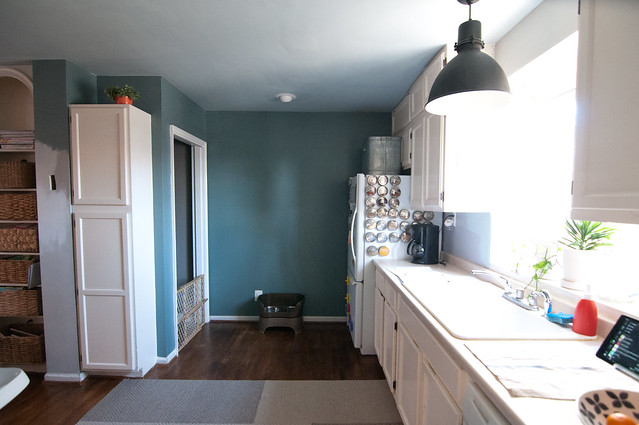 Currently for storage, they have a narrow pantry and some built-in shelves. These will be replaced by a larger streamlined pantry that will include a narrow center panel for a vacuum and broom. 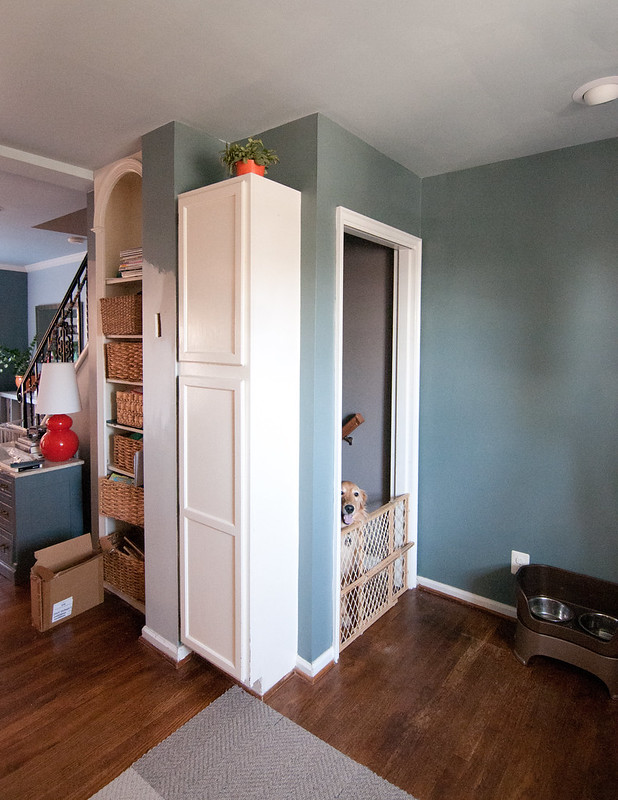 The new peninsula will replace this existing corner of shelves. While this may seem like adequate storage space, Brandy and Charles have a two-year-old son, and anyone with toddlers understands that toddlers and open shelves don’t mix. The peninsula will have a raised bar with space for stools. 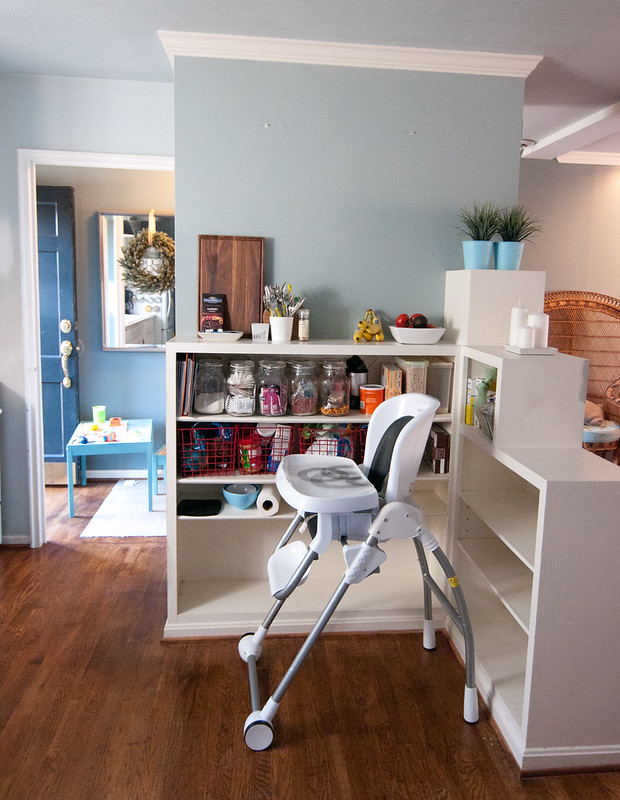 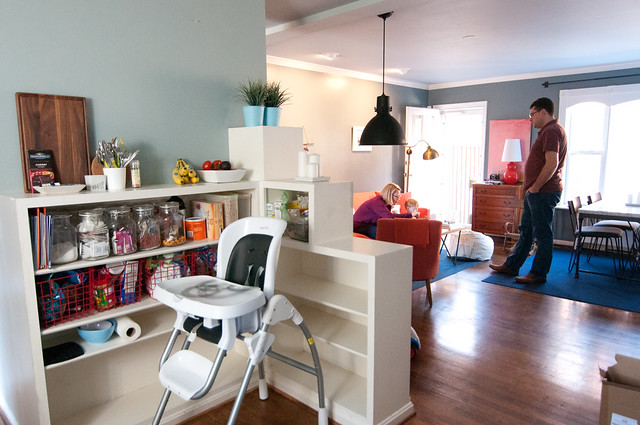 The decision to renovate was made last March, but after months of making calls to contractors — and no one returning her calls — Brandy started to lose hope that the work would ever get done. Finally, she spotted a Cameo Kitchens truck in the neighborhood, gave them a call (to which they responded!) and plans moved forward. Brandy especially liked how they worked with her own design ideas.

In the finished plans, you can see how the cabinets and counters will extend across the front wall (more than doubling the counter space) and the peninsula will include the stove cooktop and bar. 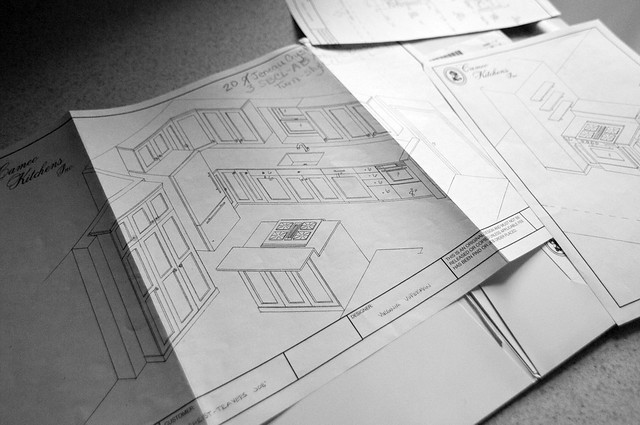 All the cabinets will be replaced with navy blue lower cabinets and white upper cabinets with glass knobs. (Brandy is hoping she can donate the existing cabinets, but it’s been difficult finding a place that accepts painted cabinets.) The counters will be quartz with a similar look of marble, replacing the existing dated laminate. 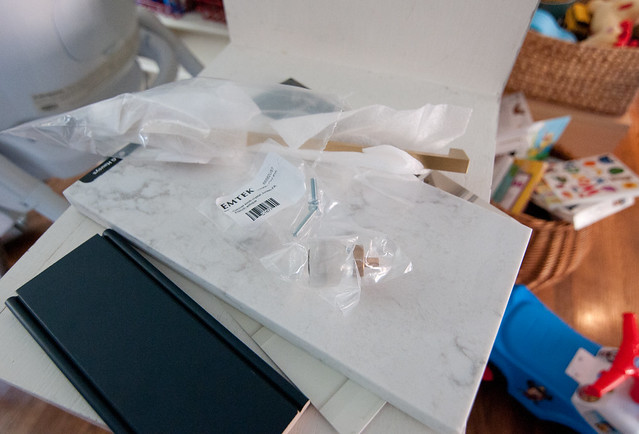 The wood floors will stay as-is. They are still in good condition and with a toddler and two pets, they’ve decided to put off refinishing for now. 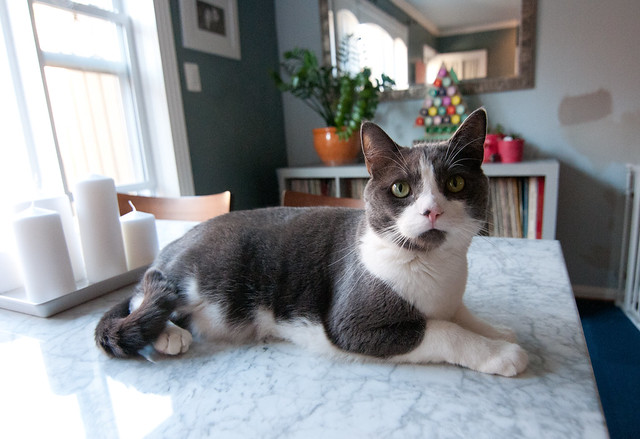 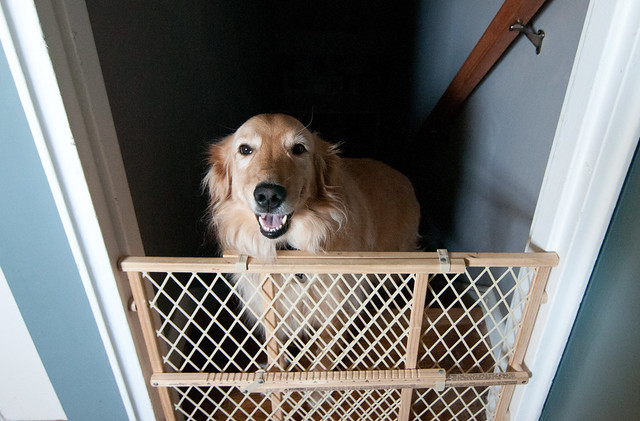 Construction is set to start on December 21 and is expected to take six weeks. Brandy is going to update us on the progress and we’ll be back in the new year for the after shots. Given Brandy’s eye for design, we know it’s going to be amazing!