The last time we checked in with Tim and Dawn, they were in the process of moving a wall to make their living room more spacious. Today we’re back to show you the stunning after photos.

The whole project started when Tim and Dawn wanted to make room for the perfect Red Barn Mercantile sectional. They also wanted to update the style of the room. Dawn organized her interior design ideas on a Pinterest board and consulted with Kay Sidahmed (at left below) from Oikasa, an interior designer and frequent contributor to DIY Del Ray, to help her realize her vision. 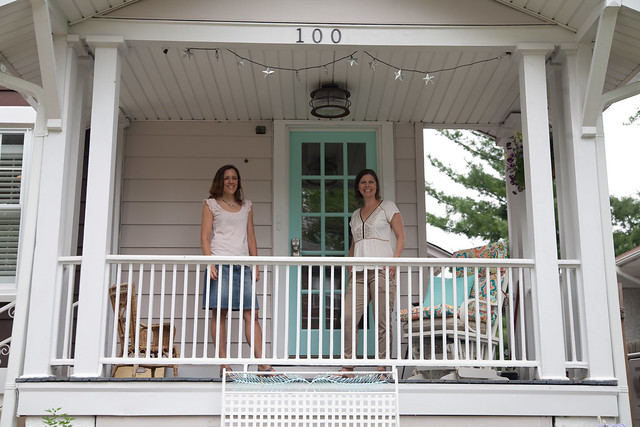 Having spent so much time on the beach in Long Island as a child, Dawn’s design tastes lean toward whites, pale blues, sandy brown, shimmery silver, with a lot of natural fabric and texture. Standing in her living room with the diffuse light pouring in, you feel like you’re in a beach cottage. 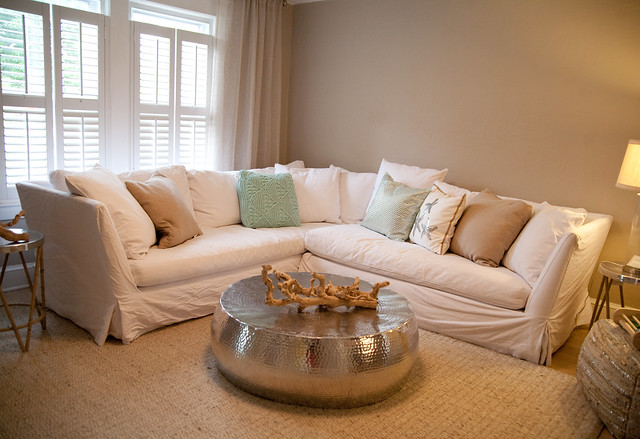 Kay offered several color choices to try on the walls. They were trying to find the perfect grey, says Kay,” that would not look too traditional, but also not too cool.” They settled on Smokey Taupe, which Kay also happened to hear mentioned in the Washington Post as a color that would give “a more sophisticated look.” 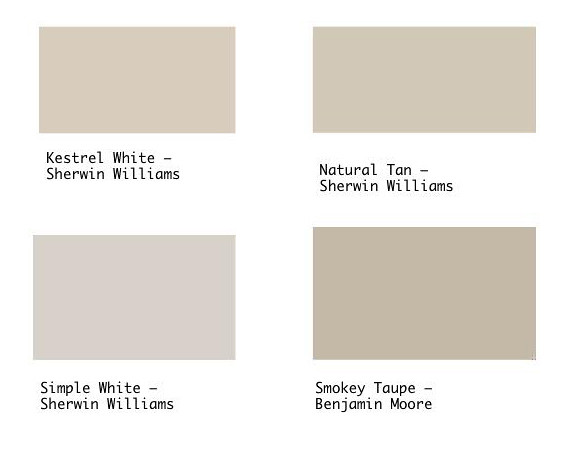 Dawn got the plantation shutters for free from a neighbor even though the size was not quite right for her front windows. But Tim was able to DIY a solution. He added a layer of vertical wood along the inner window frame that looks seamless especially after they painted the shutters to match the window frames. 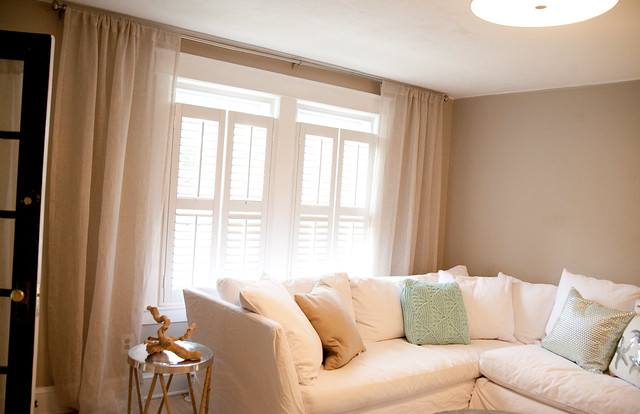 Kay suggested adding the curtains to soften the wall and window silhouette and add visual height to the room by hanging them close to the ceiling. “We chose a Belgian sheer linen,” says Kay, “for a simple, weightless look that is fresh and cozy at the same time.” 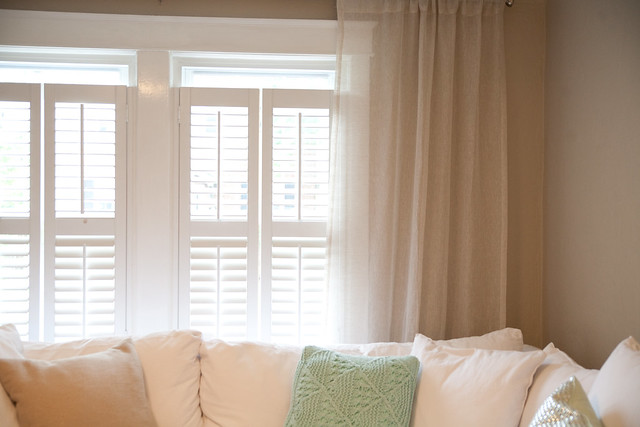 When it came to choosing a stain color for her floors, Kay says that Dawn’s Pinterest board inspired her to suggest the Scandinavian look of whitewashed floors. On Kay’s recommendation, they talked to Brett Rice of Arlandria Floors who would certainly understand the correct procedure. They put two samples on the floor. On the left is the whitewash and on the right, gray. 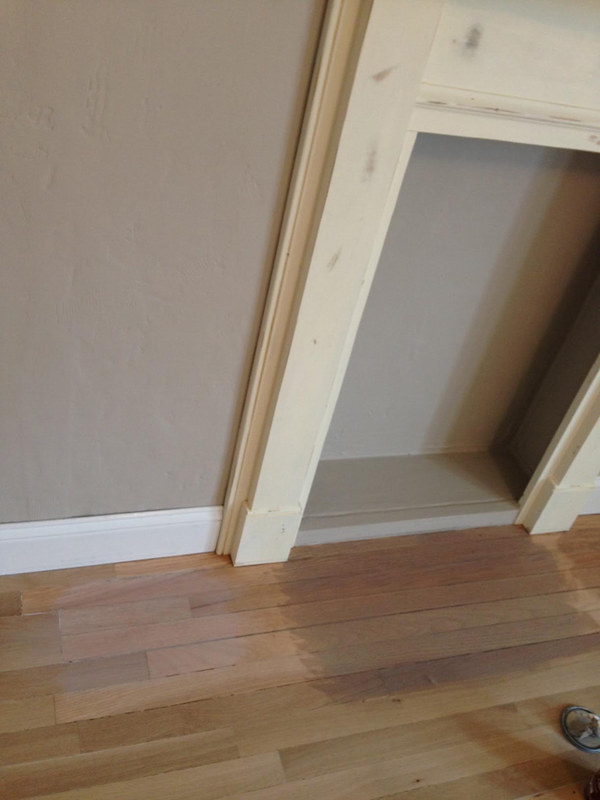 Dawn was unsure about the whitewash and started leaning towards the gray. But, she eventually chose the whitewash. “Dawn, Tim and I agree,” says Kay, “that the floors look fabulous and really rock the look and feel of the whole room.” 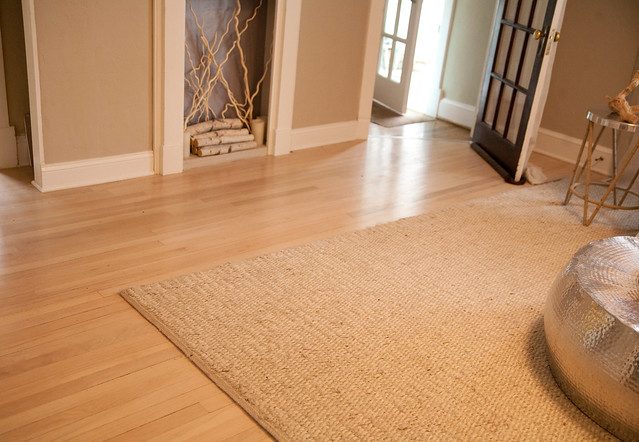 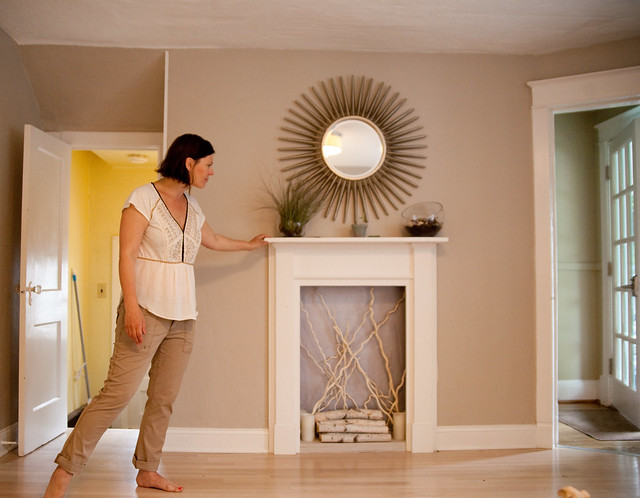 Dawn added more beautiful accessories and furnishings to the space. You can find her entire source list at the end of the post. (If you’re wondering why she chose a white sofa with young children in the home, she did some research and then deliberately chose a slipcovered sofa that she can simply remove and wash in Oxyclean to make it good as new.) 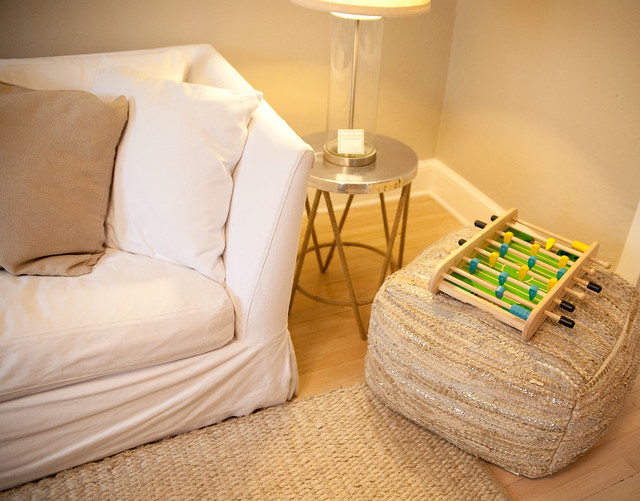 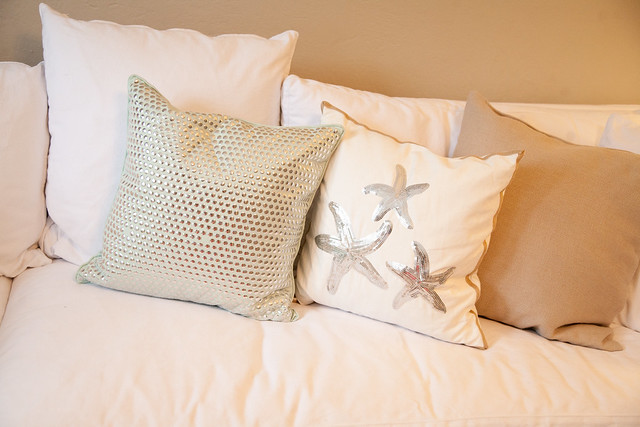 She loves the coffee table because it’s made from aluminum, even though you’d never guess it, and is really light as a result. She can simply move it to the side of the room when she and Tim entertain. “Kay gave me new ways to think about a coffee table,” says Dawn. “While I love reclaimed wood tables, they wouldn’t be a good fit because they’re really heavy and hard to move.” They also chose a round table to counter the rectangle shape of the sectional. 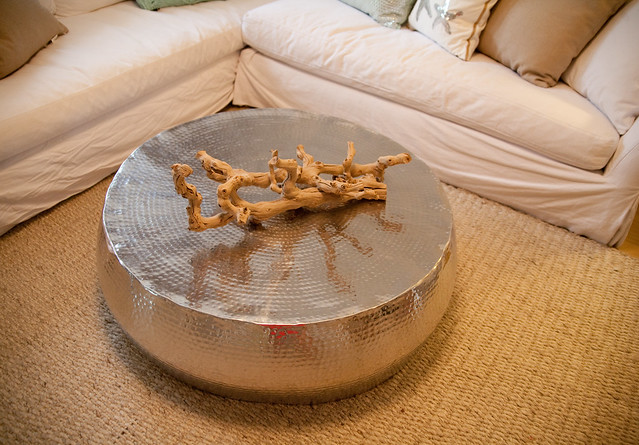 She can also let the kids play on it. (No eating in the living room though.) 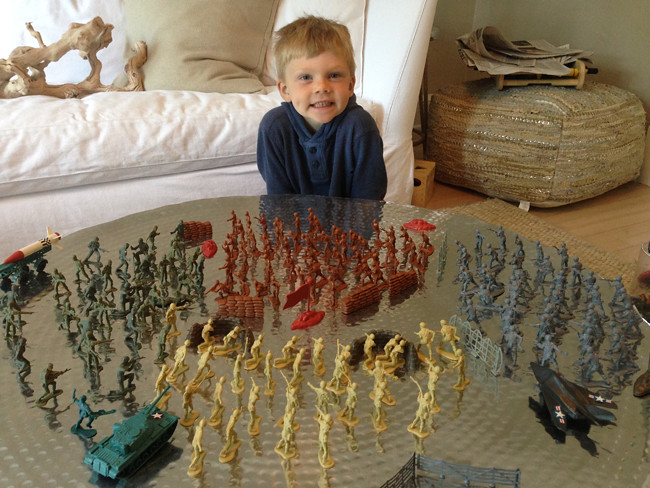 Dawn is still searching for an artist who can paint an abstract diptych or triptych of the ocean to hang on the long wall behind the sofa. If you know of anyone, she says to send her an email.

Our next post will focus on the exciting work they’re doing in the dining room, as well as their basement “before” renovation plans. The DIY work at Tim and Dawn’s house is, lucky for us, so inspiring and seemingly never-ending!