For her 7th birthday, my daughter Nadja decided on a rainbow theme for her party. It was easy enough to find plenty of inspiration for the party on Pinterest and other websites — rainbow snacks, rainbow crafts, rainbow decor, even a 7-layer rainbow cake. 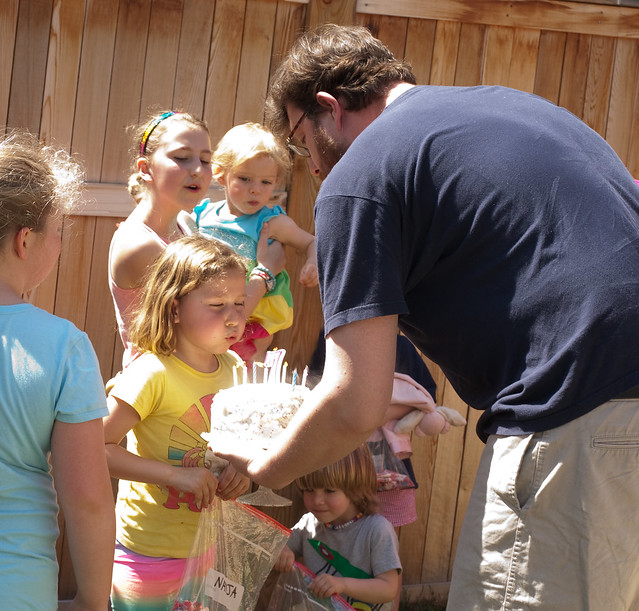 For starters, Nadja’s older sister Ana and and her friend Gigi drew a rainbow path from the front sidewalk to the back with chalk and created a cheer that my brother-in-law caught on video.

Ana found a rainbow cake recipe that she made with the help of my husband Matt. They made individual layers in aluminum pans in all of the rainbow colors (except indigo, which Ana decided was too hard to create with food coloring). 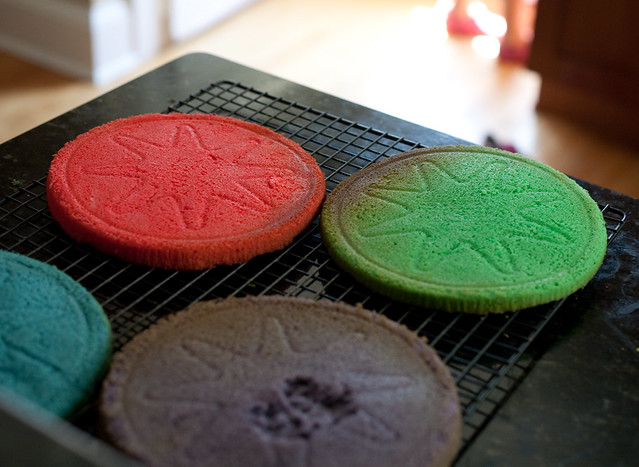 Matt added homemade buttercream frosting between the layers with rainbow sprinkles as the final flourish. 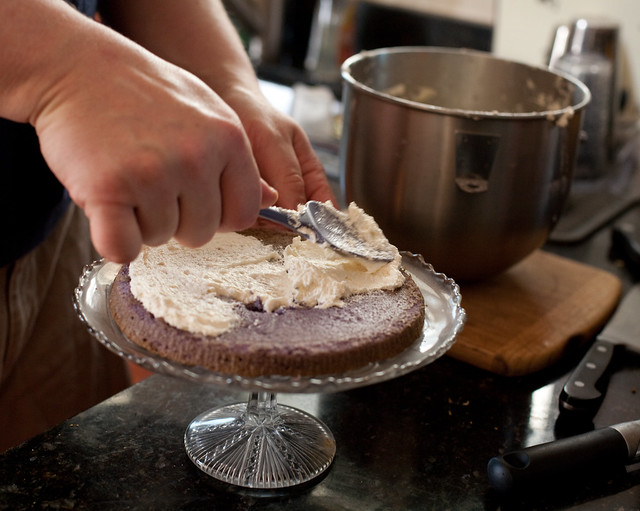 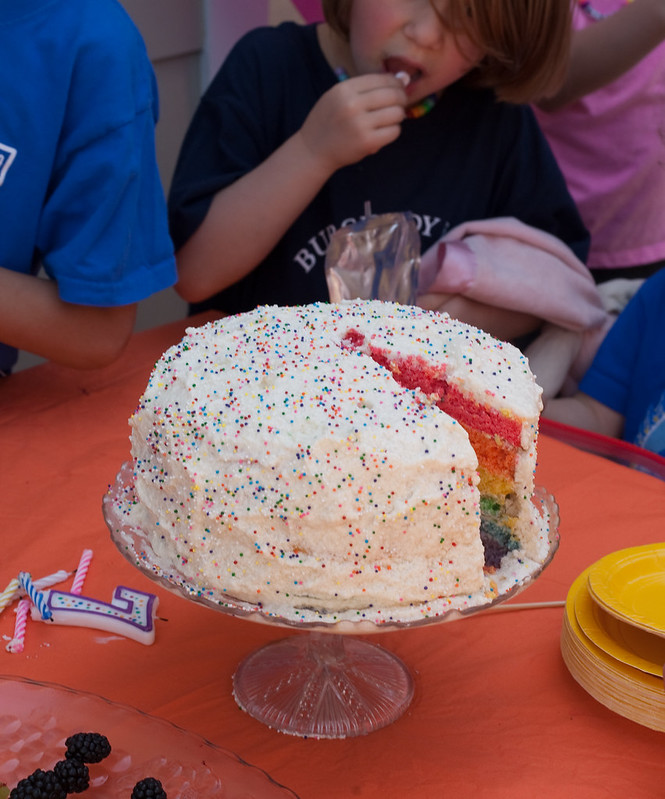 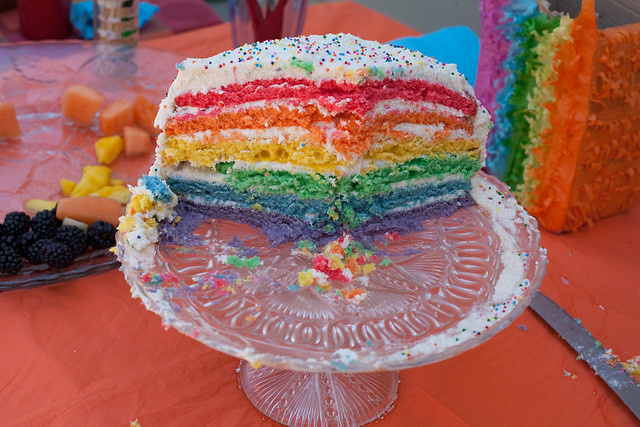 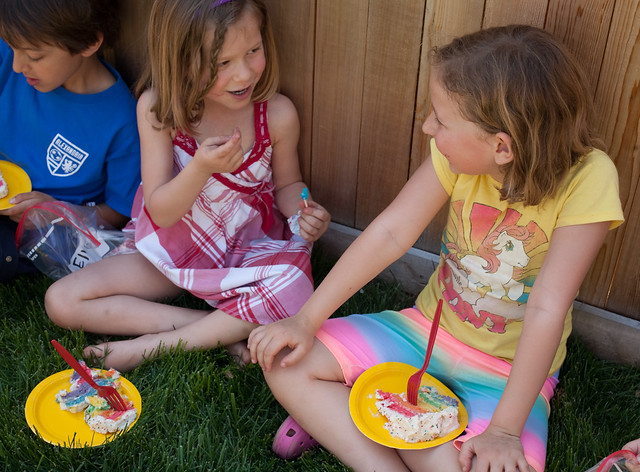 Ana, Gigi and Nadja cut fruit in the colors of the rainbow and shaped them into a rainbow (of sorts) on a big platter that the kids could slide onto skewers for a party snack. 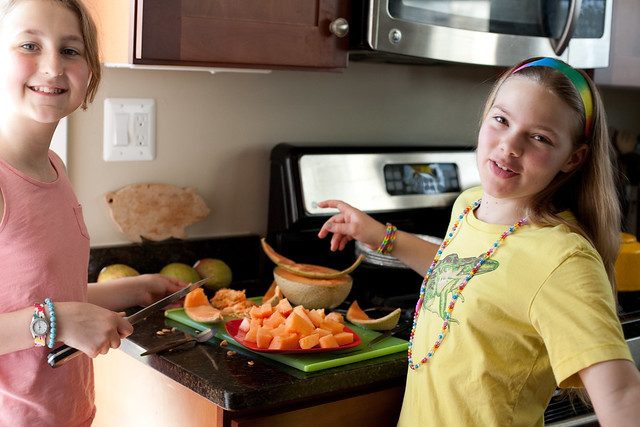 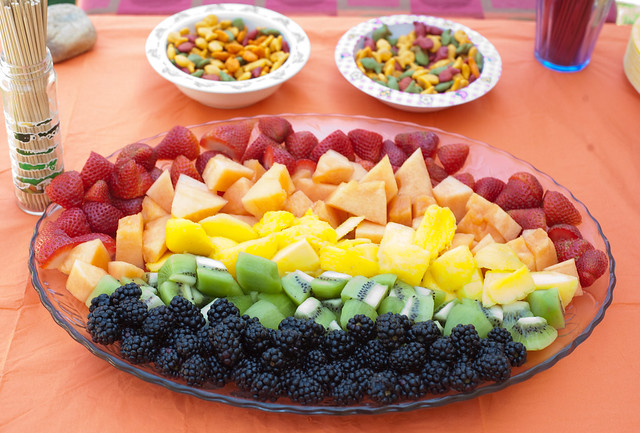 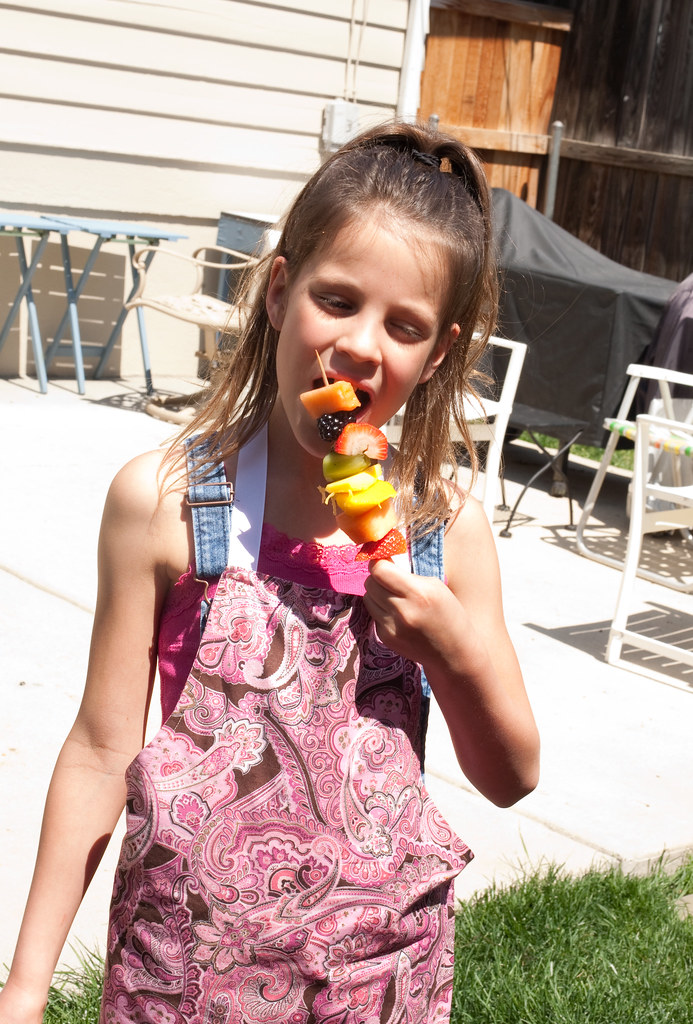 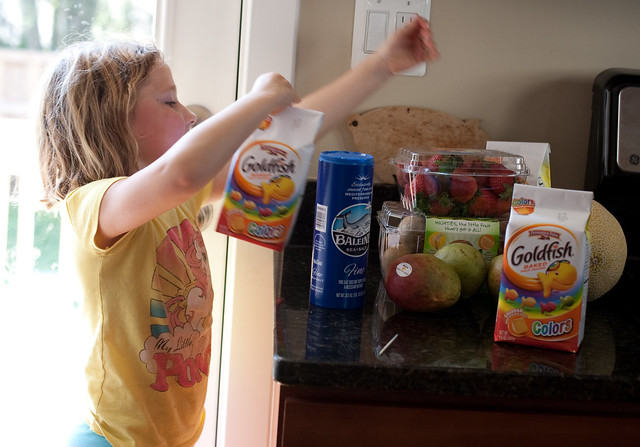 For a birthday craft, we tie-dyed t-shirts in bright rainbow colors. The older girls, Ana, Bea, and Gigi, each worked with one child at a time to help them decide and execute their unique design. (If you’re curious about how to do tie-dye for a big group of kids, you can follow a post we did about a soccer party tie-dye activity. In a future post, I’ll also describe the process I followed for Nadja’s birthday, which differed a little bit.) 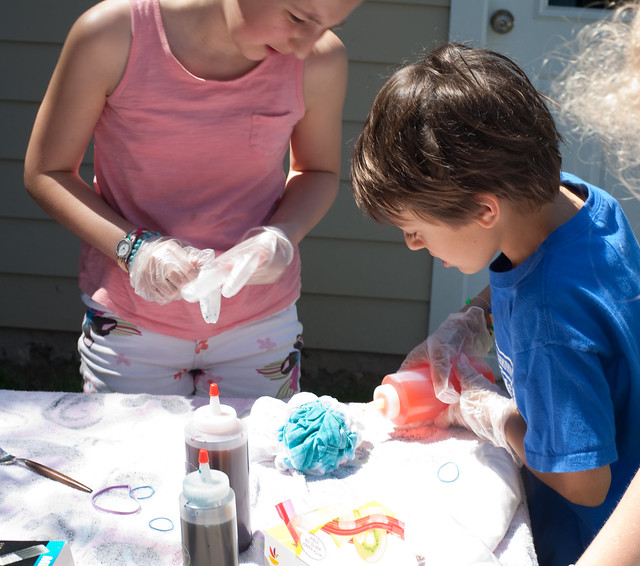 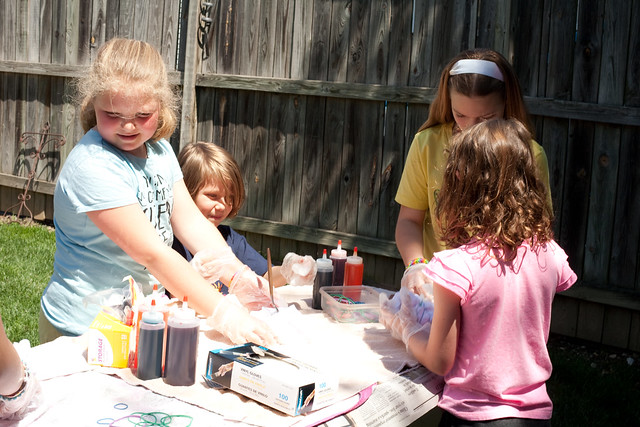 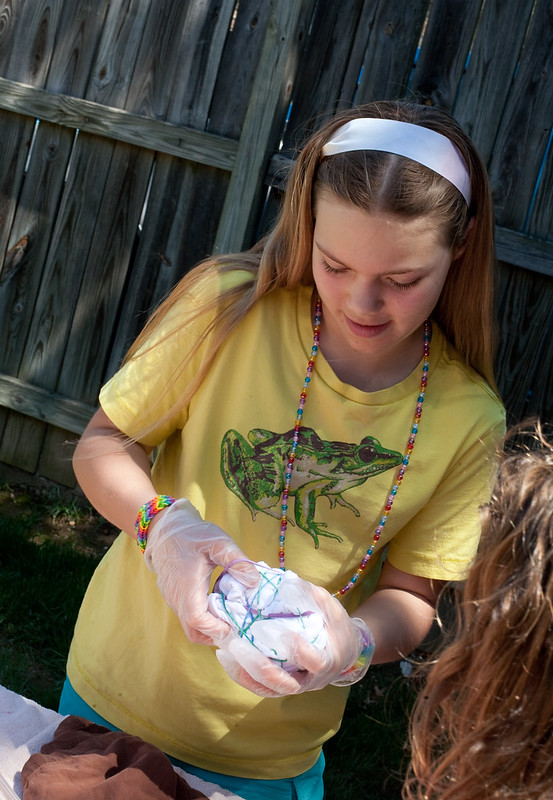 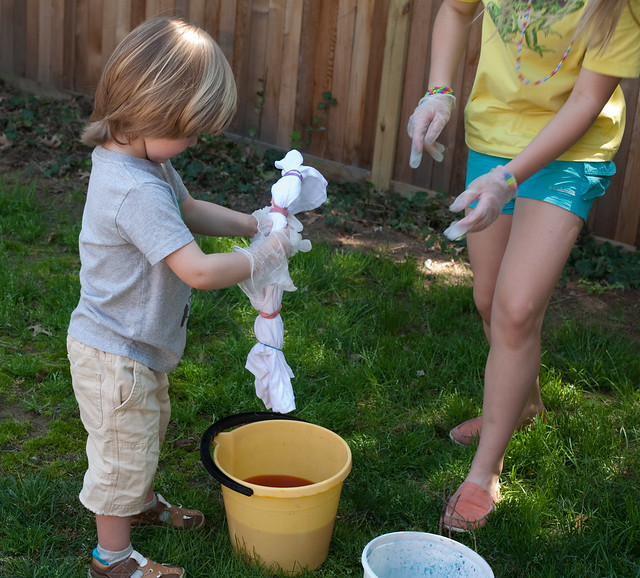 While three kids at one time were making tie-dye shirts, we kept the others busy making jewelry with beads, in rainbow colors, along with letter beads to spell out their names. 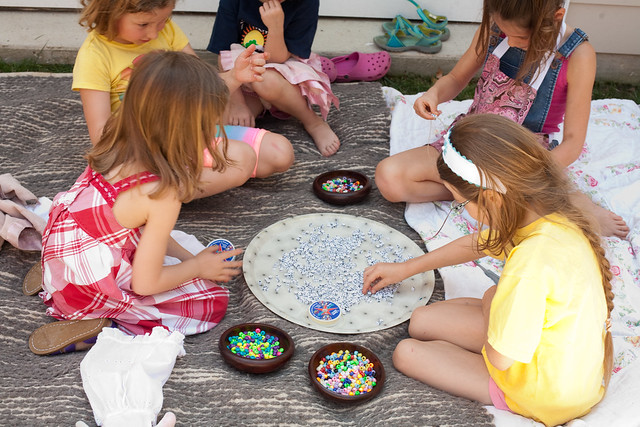 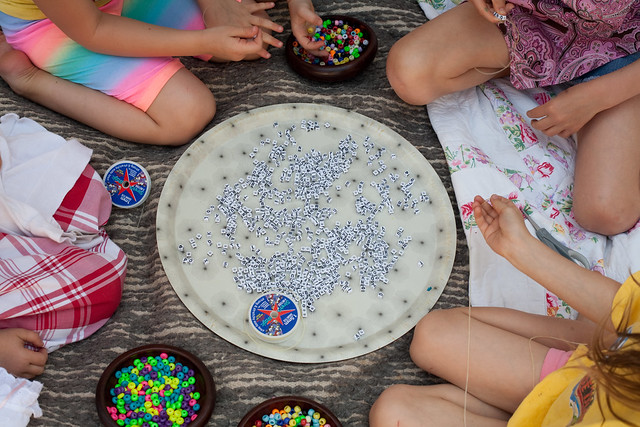 Of course, we had to have the requisite piñata, which has become a tradition for Nadja’s parties. The party store, lucky for us, had a rainbow piñata in stock. 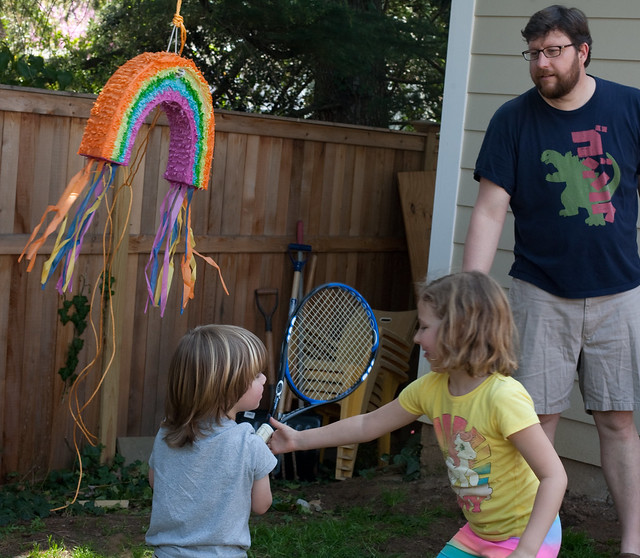 A highlight for me of this year’s party was how much my 11-year-old Ana and her two friends Bea and Gigi did to help prepare and host. Nadja felt even more special with her sister playing such a big role in her birthday celebration.