I had the pleasure of touring Justine and Jonathan’s house to see their art collection, every piece with a meaningful back story. What I didn’t expect, but was not surprised to learn is how artistic Justine, Jonathan, and their two young children, Miles and Vivien, are in their own rights. We started in their living room to view the large oil painting they bought in a gallery in Florence, Italy, where they got married. 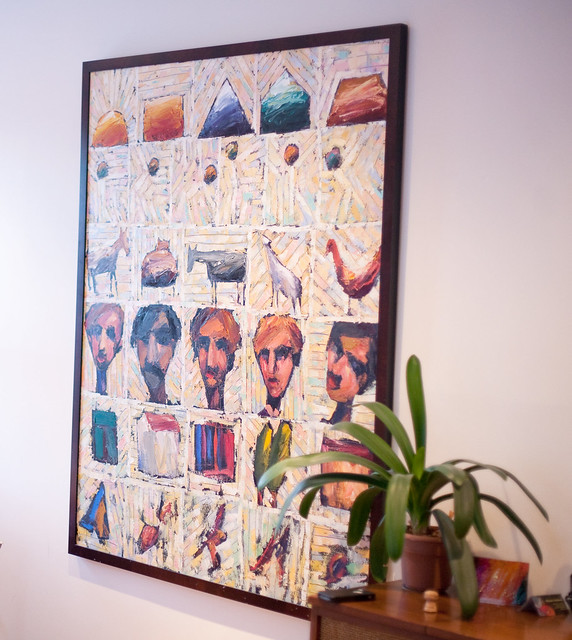 They knew they wanted to buy a painting during their stay and they went into many galleries before they saw this painting and both loved it for the colors, the subject matter, and the overall style. 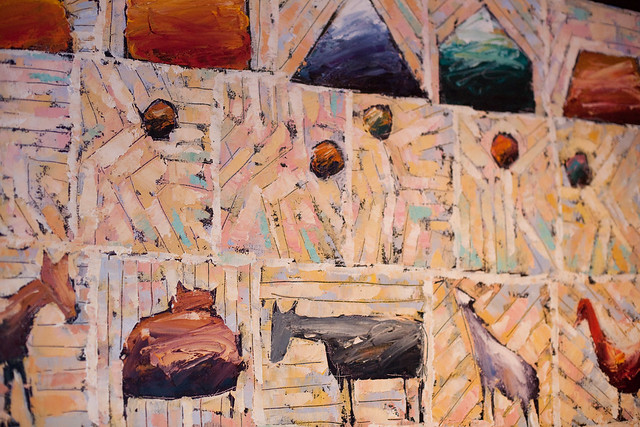 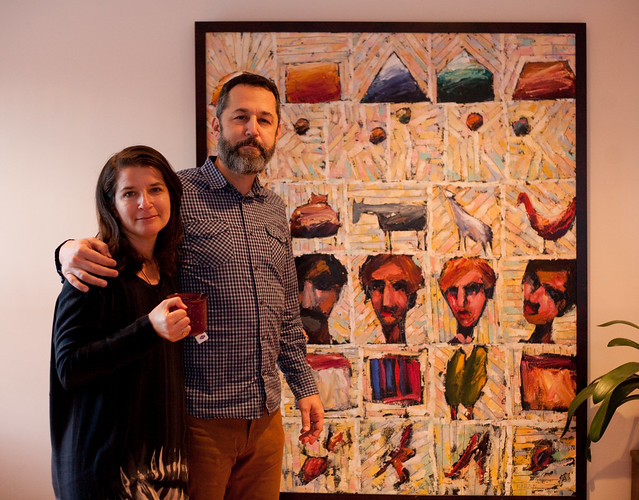 Justine even still has a photograph that they had taken in the gallery with the artist. When they mentioned that they had just gotten married, he opened a bottle of wine, with a lot of fanfare, for them to share together in celebration. 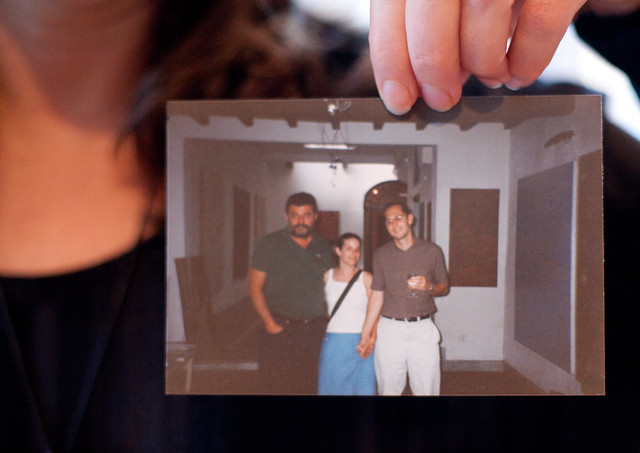 Over the mantle, Justine showed me a painting she and Jonathan bought together at the Torpedo Factory in Old Town depicting the waterfront where they love to stroll together. 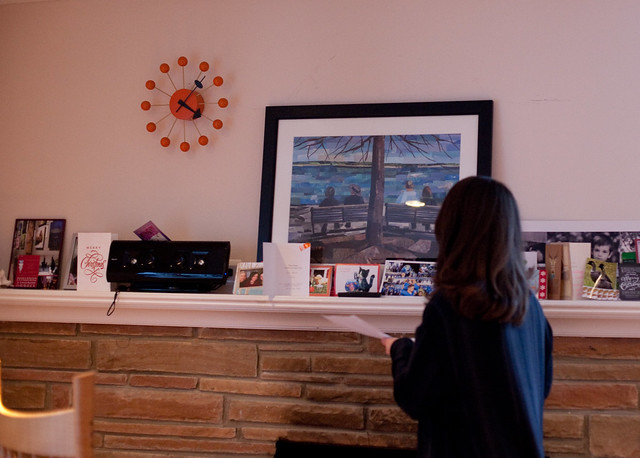 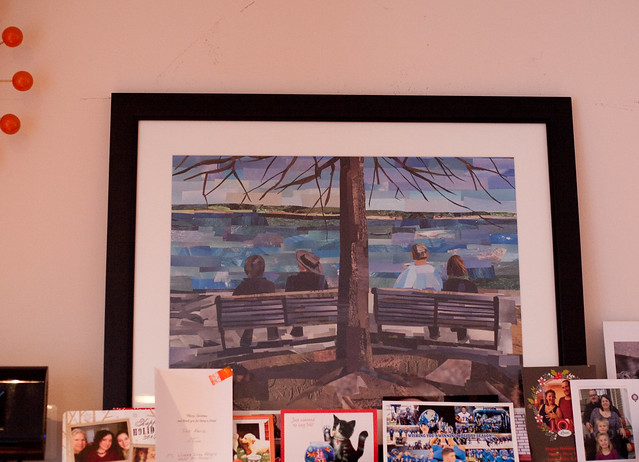 In the living room, they’ve also hung this photograph that Justine took while they were on a vacation together in Charlottesville. Justine found this frame made from reclaimed barn wood and thought it was perfect for the photograph that she took of the deer at Shenandoah National Park during the same vacation. “As we were driving out of the park, she told me, “a baby deer came running towards our car. Jonathan slammed on the breaks to miss hitting the baby. Then, about 10-feet away from the car stood the mother standing perfectly still. I took the picture with my camera phone without even rolling down my window in fear that she would flee.” 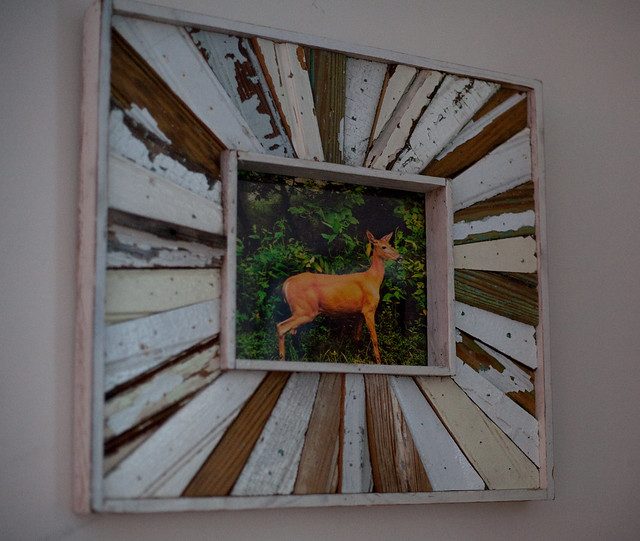 Justine’s mother is a ceramic artist by hobby who made this sweet panda for Justine, which she keeps on the fireplace mantle. 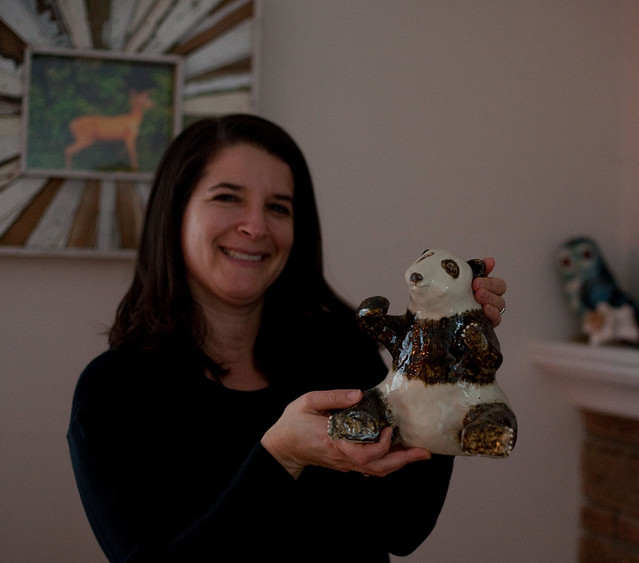 In the dining area with it’s vibrant red walls, Justine and Jonathan found oversized pieces at CB2 to hang. The black-and-white photos are of Paris, a place that Jonathan has always wanted to visit and where Justine spent a semester abroad in college. 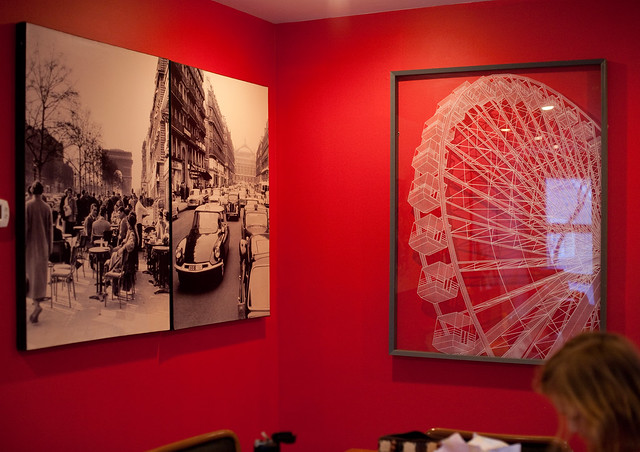 They also have a keepsake print by Peter Max from the Cherry Blossom Festival in the dining room – a gift from Jonathan to Justine, who loves the festival. 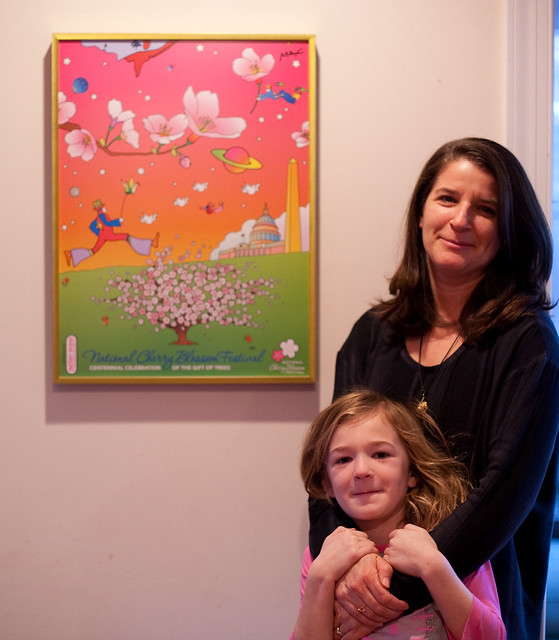 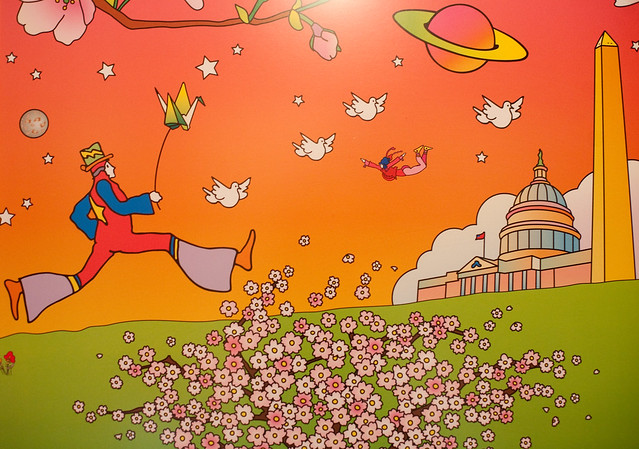 I just love the wooden deer head in their sunroom, with its serious expression and unrealistically large antlers. They wanted something for the space and Jonathan researched ideas and came up with this perfect piece. 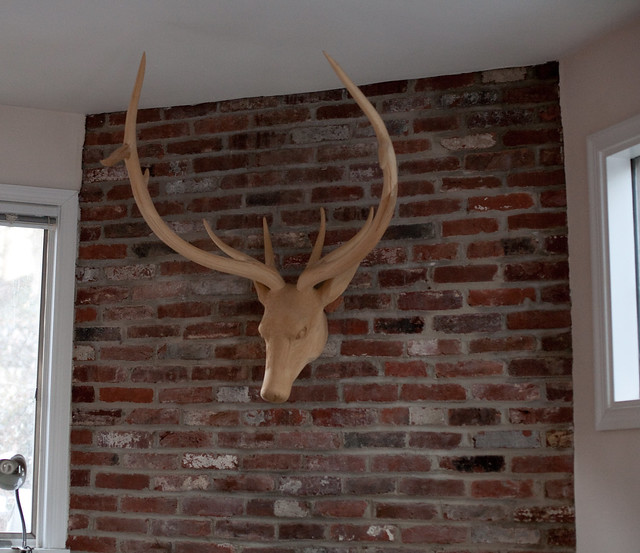 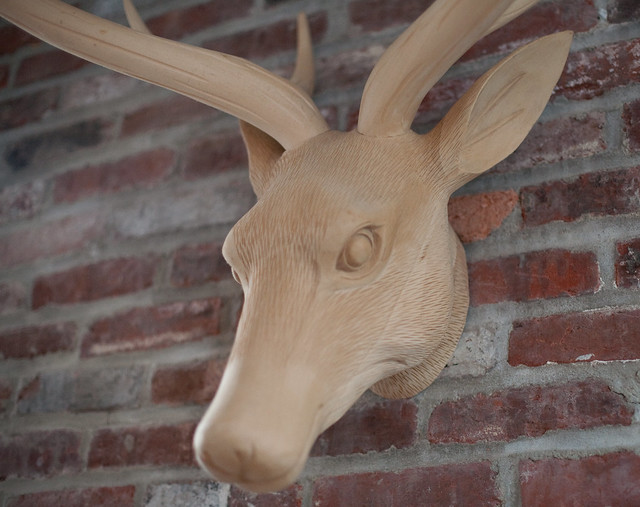 It’s great how Jonathan and Justine support local artists — this photograph is from an artist who was showing her work at Buzz Bakery. Jonathan says he saw it and called Justine so she could come by and take a look. The image is quite large, about 20 x 24, but still crisp and richly colored. 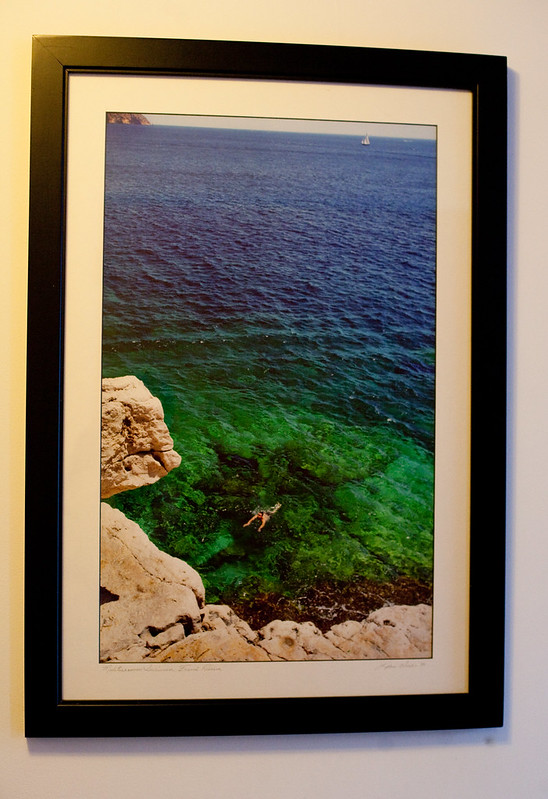 In Jonathan’s office, I couldn’t believe my eyes when I learned that he had painted this absolutely gorgeous painting of the Italian Riveria (Cinque Terra) in Italy. He says he used a photograph taken during their honeymoon as his inspiration and completed it while taking a class at the Torpedo Factory. 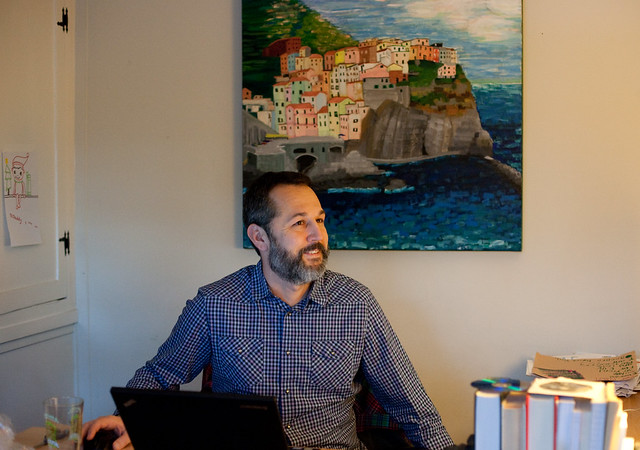 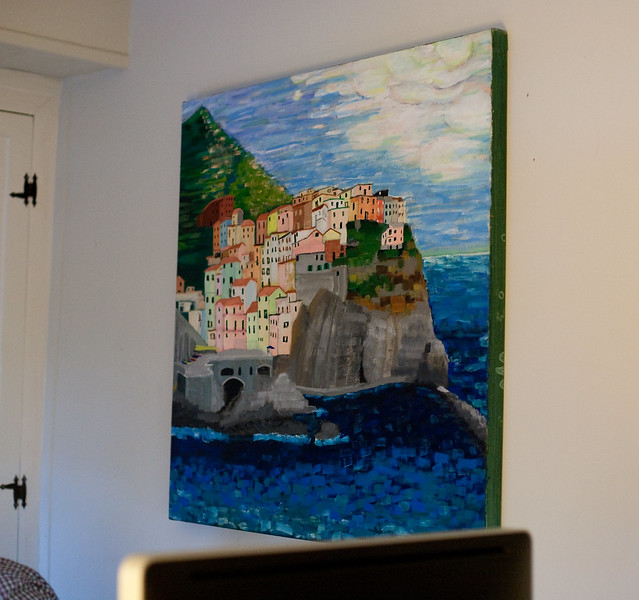 They have quite a few pieces hung in Jonathan’s home office, such as this one by artist Tim Biskup. 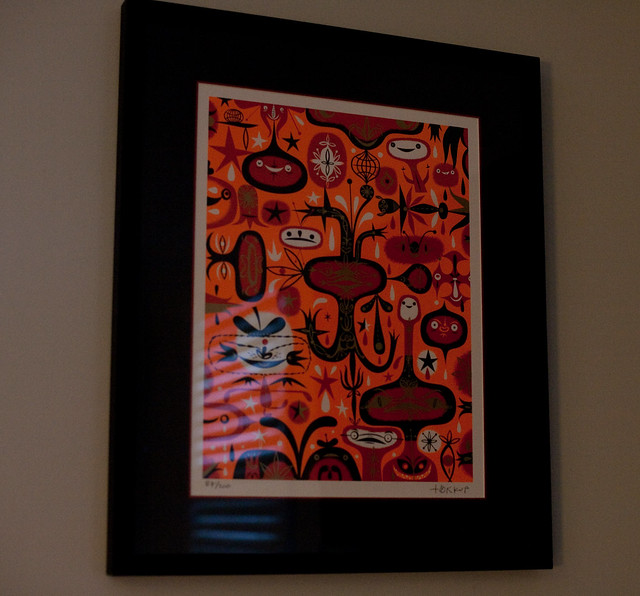 This large painting in the center is also one of Jonathan’s – an abstract of the map of Paris. “I know,” says Justine, “I need to take him there!” 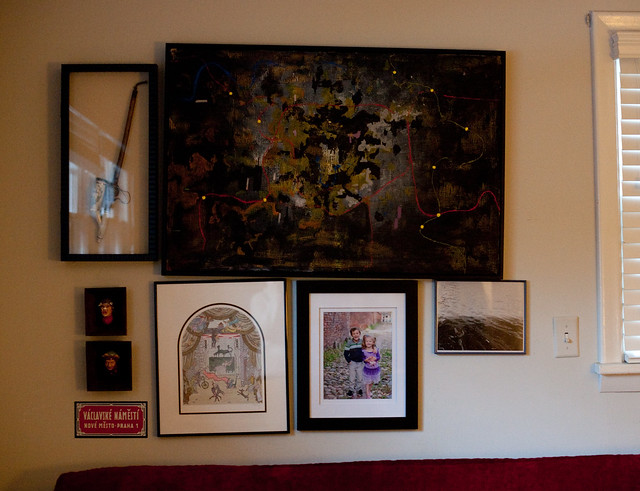 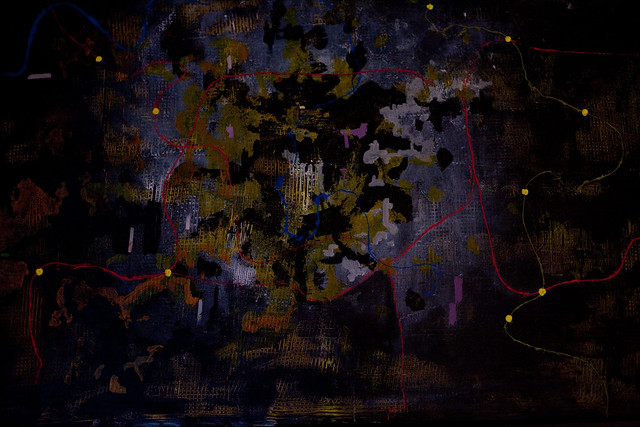 And in the collage of prints over the sofa, they have an Edward Gorey print. Jonathan and his brother are both huge fans of the American-born artist and author, and each has the same print. 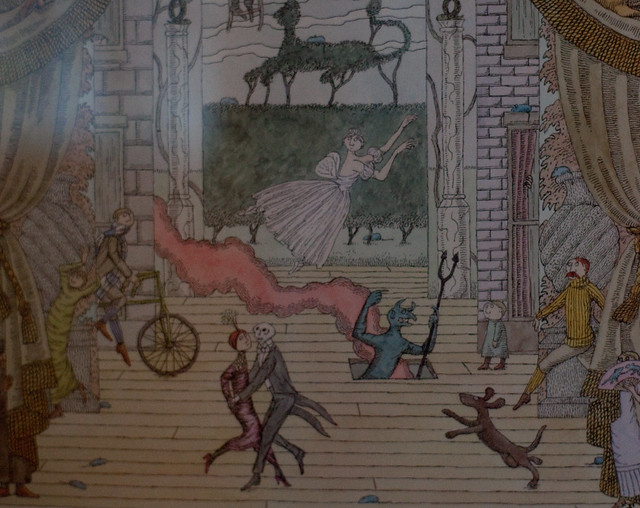 Upstairs, they’ve hung a painting of their beloved, late dog, Chester, that again Jonathan painted from a photo. 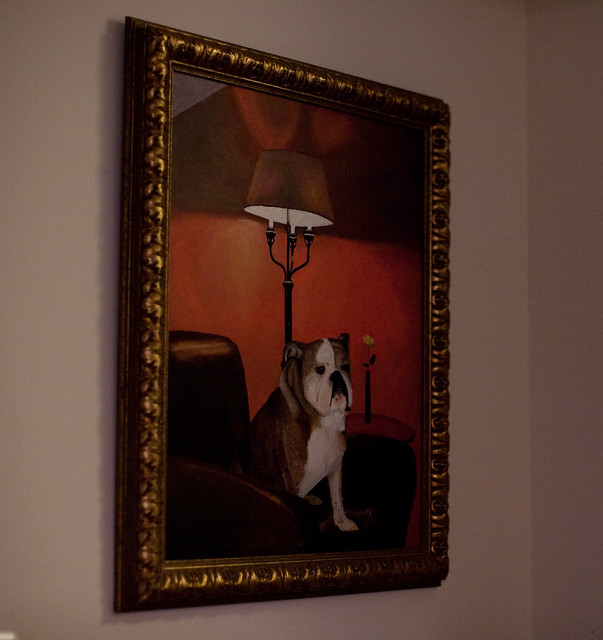 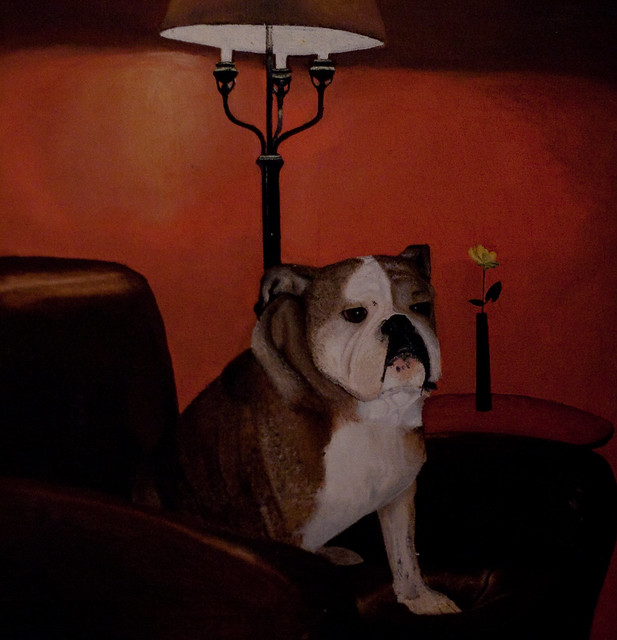 Every one in the family has taken classes at one point or another at the Torpedo Factory. For his part, Miles is interested in photography so he took a class to learn the basics. He was excited to show me this beautiful black-and-white photo he took and developed on his own in the darkroom. 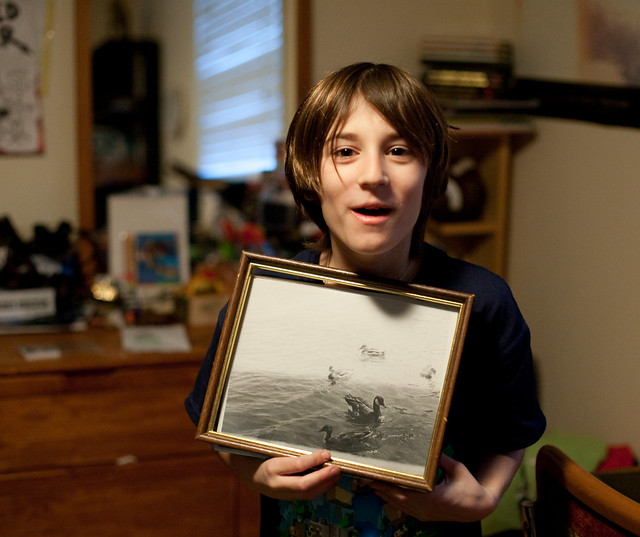 And, in his sister’s room, I saw one of her creations from a class she took. 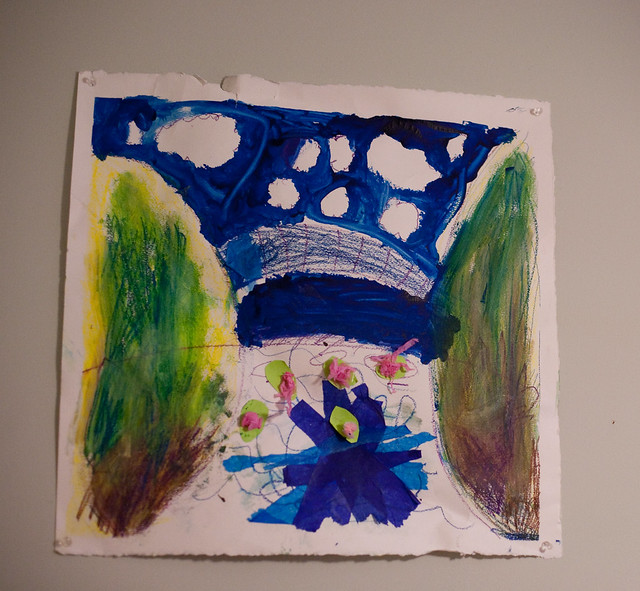 She has also pinned up a silk screen that Jonathan made from a photo of her. 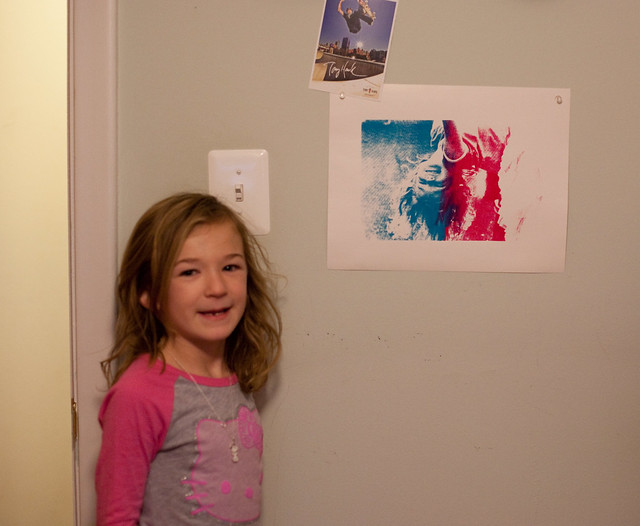 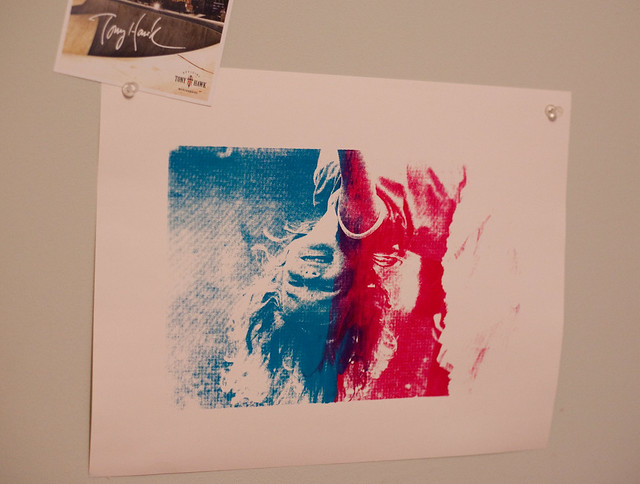 It’s plain to see from Jonathan and Justine’s art collection how devoted they are to art-making, both by supporting artists and developing their own craft.