Giant Yarn Donuts Made to Order

Early last month, we told you about the special project for the Del Ray Yarn Bombers – the construction of a half-dozen yarn donuts for the new Sugar Shack Donuts & Coffee shop, commissioned by owner Rob Krupicka. We’re happy to report that the donuts are well on their way and are looking quite scrumptious! Our inspiration was a box of the actual hand-crafted donuts we admired, photographed, and gobbled up. 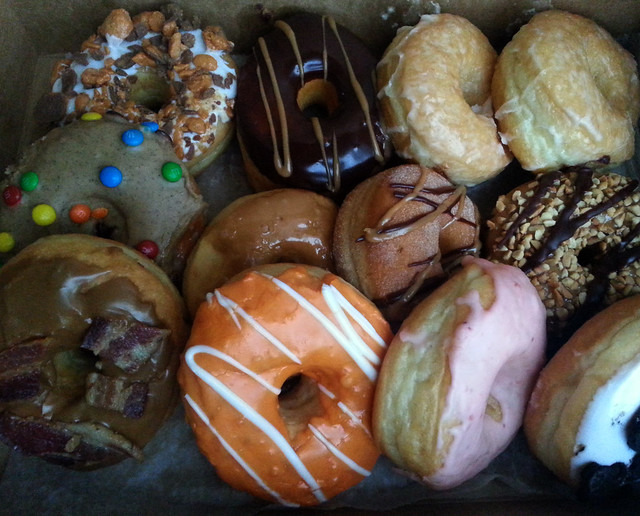 We sketched out various ideas for making the donuts, after settling on a light brown for all of the bottoms. 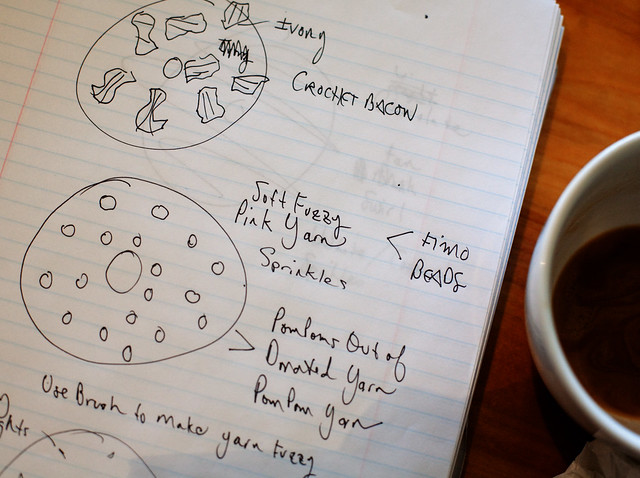 Amanda is holding the smaller prototype that Stephanie created to test out her idea for the pattern. 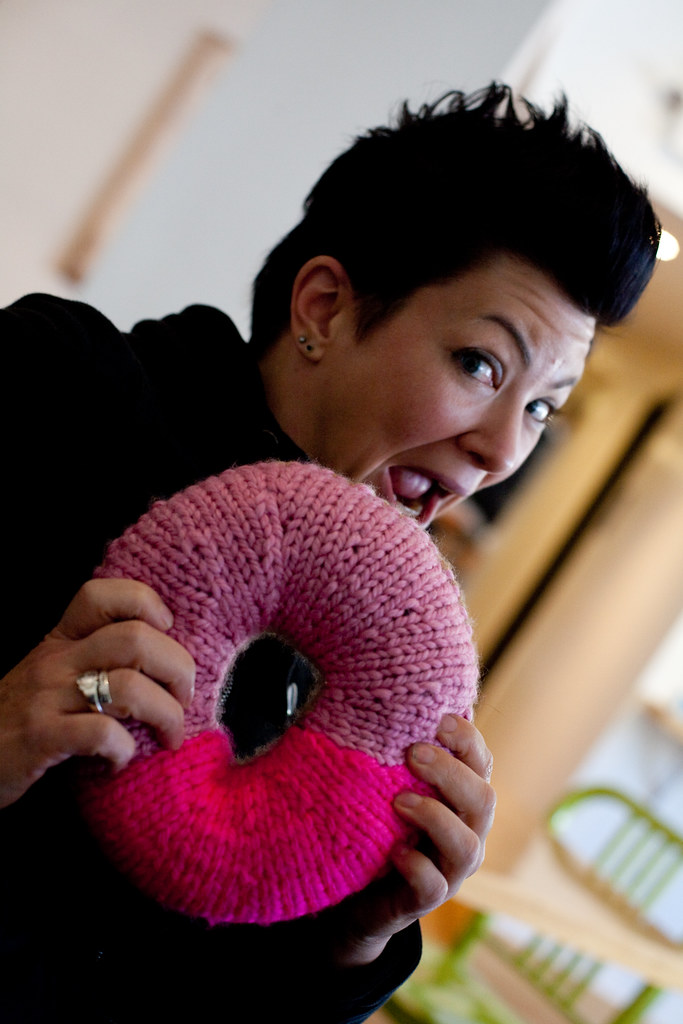 Once we finalized our initial ideas, we got busy ordering supplies and making the plans come to life. 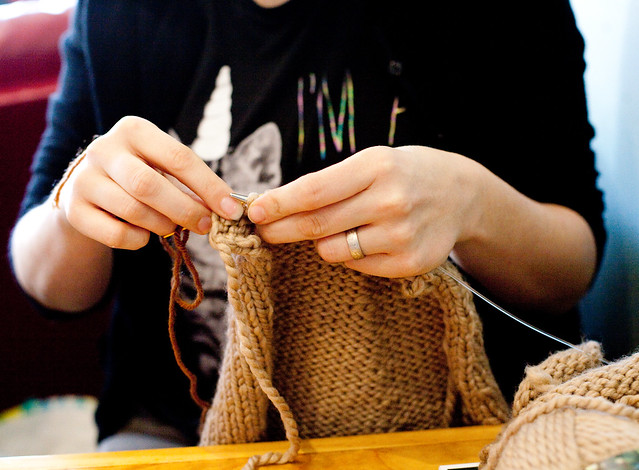 Here’s glimpse of the donuts in progress, starting with the #1 pink frosted donut. What you’re seeing here is one of four panels with the main donut batter on bottom and frosting on top. Stephanie is brushing the yarn with a cat brush to fluff it up. (The four panels are later seamed together and assembled on a padded tire, as you’ll see later in the post.) 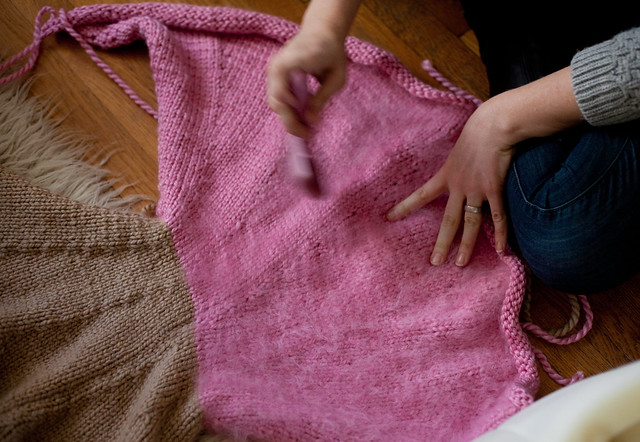 The pink donut will be “sprinkled” liberally with colorful crocheted balls. We have about 1/4 quarter of the sprinkles done. One of our members, April, taught a few of us how to crochet around a wooden ball using a “magic loop.” 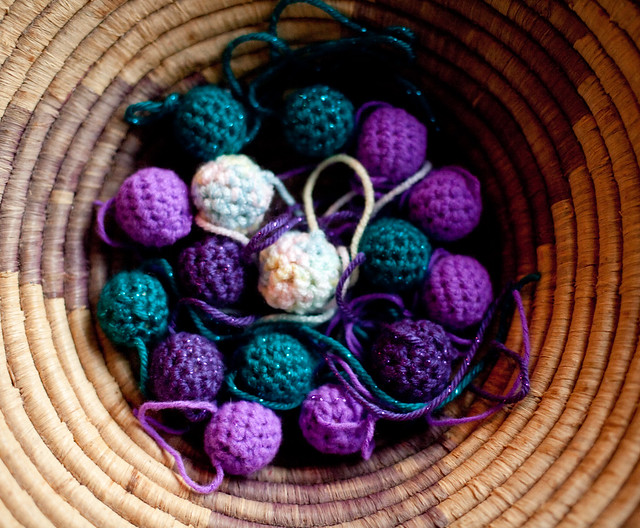 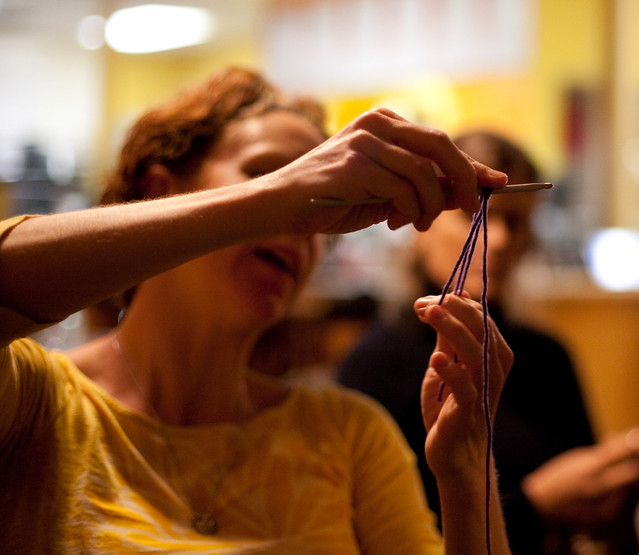 Our #2 donut is dark chocolate with white frosting. For this one, we wanted some shine for the brown frosting and considered knitting with ribbon and then, after experimenting a bit and factoring in the cost of supplies, we chose to hold a chunky brown yarn with a shimmery yarn in the same color, and then knit in crystal beads throughout. It’s amazing how the beads catch the light and sparkle. After this one is sewn together, we’ll add some stripes of white frosting across the top made from a long white i-cord. 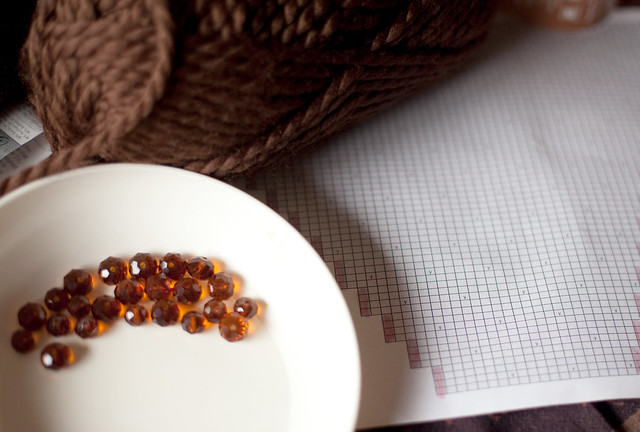 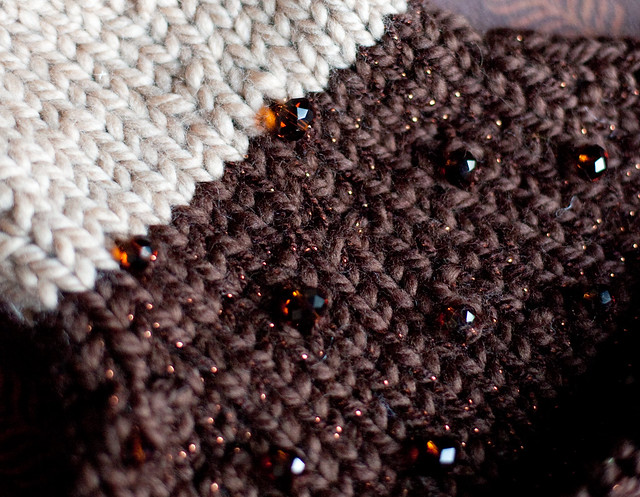 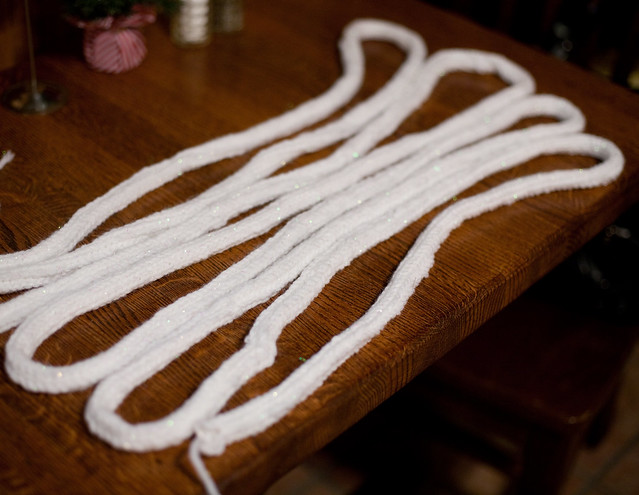 I’m going to keep our plans for donut #3 a secret until I have some progress to show, except to say that it involves lights (and promises to be spectacular). Donut #4 is maple bacon, so we tried a few ways of making bacon, finally nailing it with this needle felted bacon. We’ll have 12 total atop a luscious maple-colored frosting. 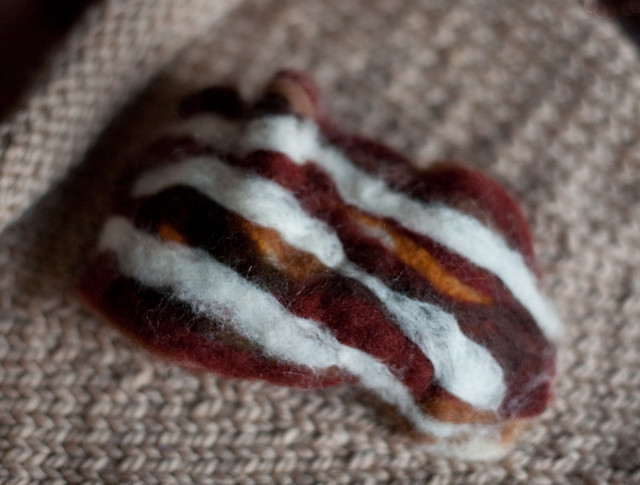 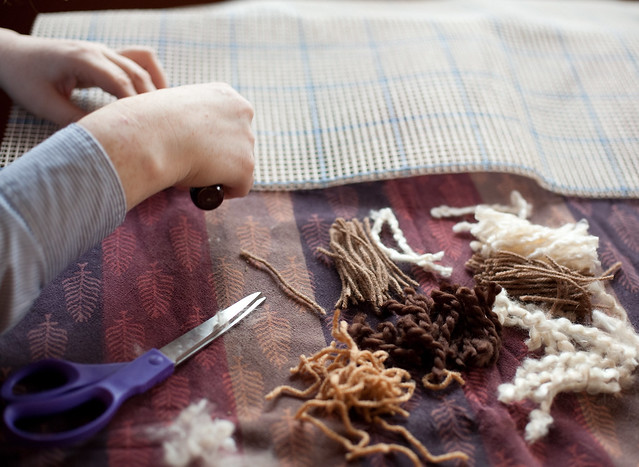 And finally, donut #6, is going to be a dazzling rainbow colored donut with sprinkles – made how and with what? We’re pondering the possibilities. 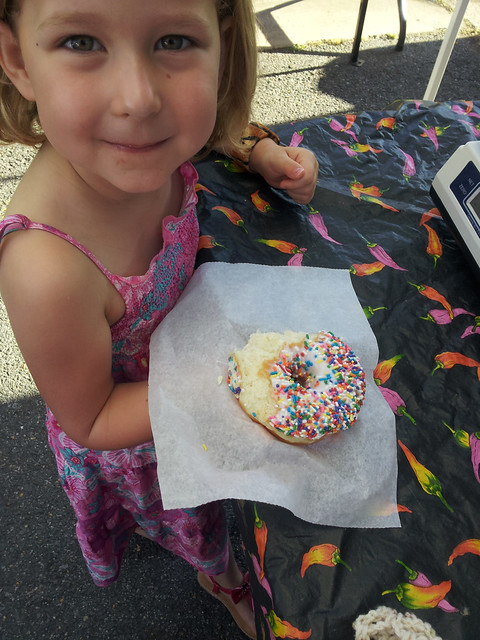 We were excited to get our first finished donut on the actual tire, so we got together for an afternoon work session and padded the tire with foam core – purchased used from UpCycle CRC, who got some of their supply from the Dairy Godmother –  to make it good and fat. Rob reminded us that his donuts are not uniformly shaped because they’re individually made, so he encouraged us to make bumpy but overstuffed donuts. You can also see in this photo the bolts he installed in the tire, which he’ll use to hang the finished donuts from the ceiling of the store. 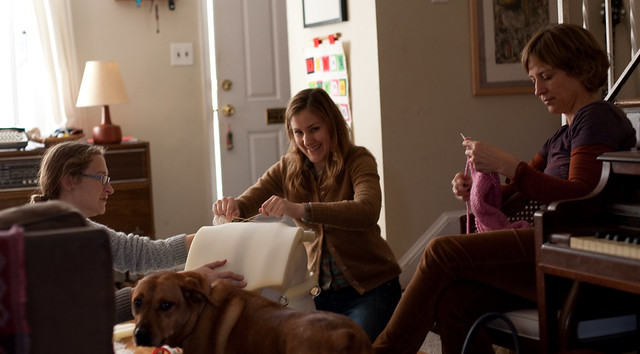 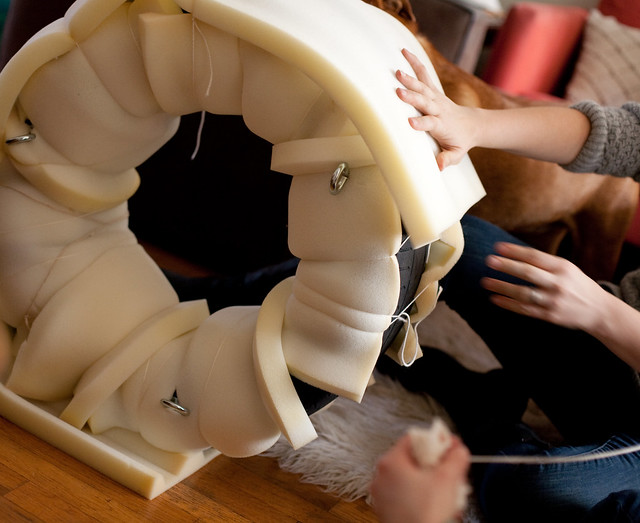 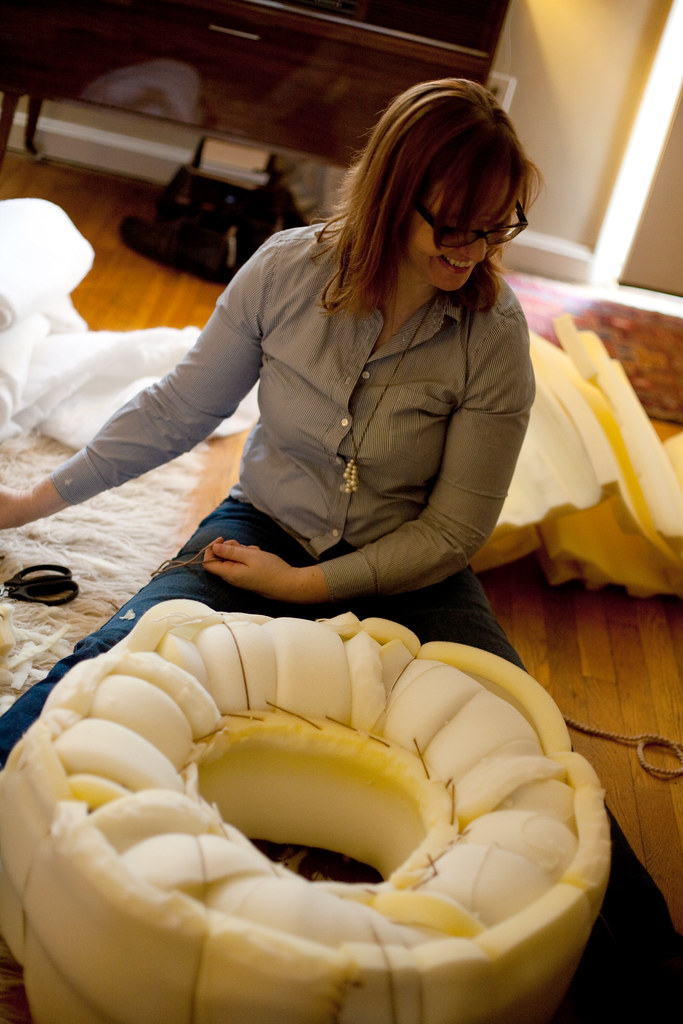 The yarn panels will cover the foam completely, leaving room for the telltale donut hole. 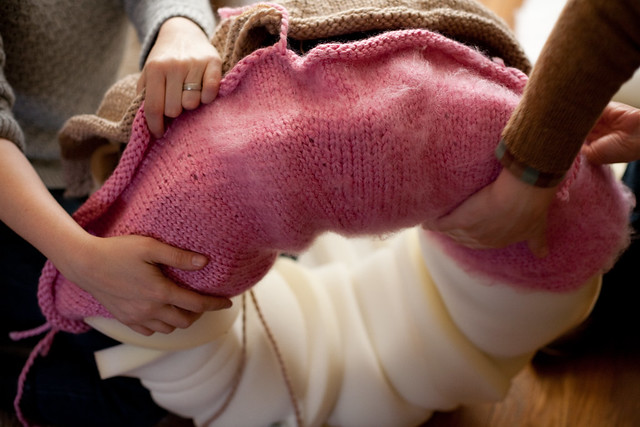 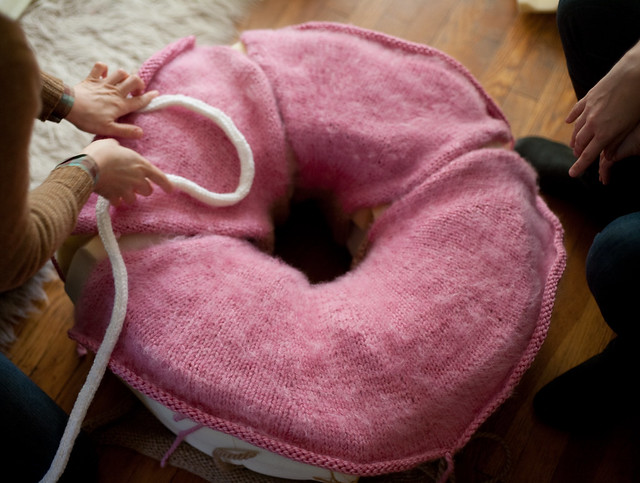 Were having a great time and there’s still plenty to do. If you want to get involved, let us know! Send an email to our Google group to join the group and receive email updates. Or comment on this post and we’ll get in touch with you. We are also having work sessions every Saturday at Bon Vivant cafe from 11 a.m. to 2 p.m. and most Mondays from 6:30 p.m. to 8 p.m. at Caboose Cafe.