Earlier this summer, we invited members of the Del Ray community to join us on our inaugural Del Ray Urban Farm Tour. The tour took place this past Saturday with over 30 people visiting seven Del Ray “farms.” We divided up into two groups and traveled to each stop by bike where we received tips on soil prep and pest control, inspiration for garden design, advice on seed starting and more from each homeowner/farmer. 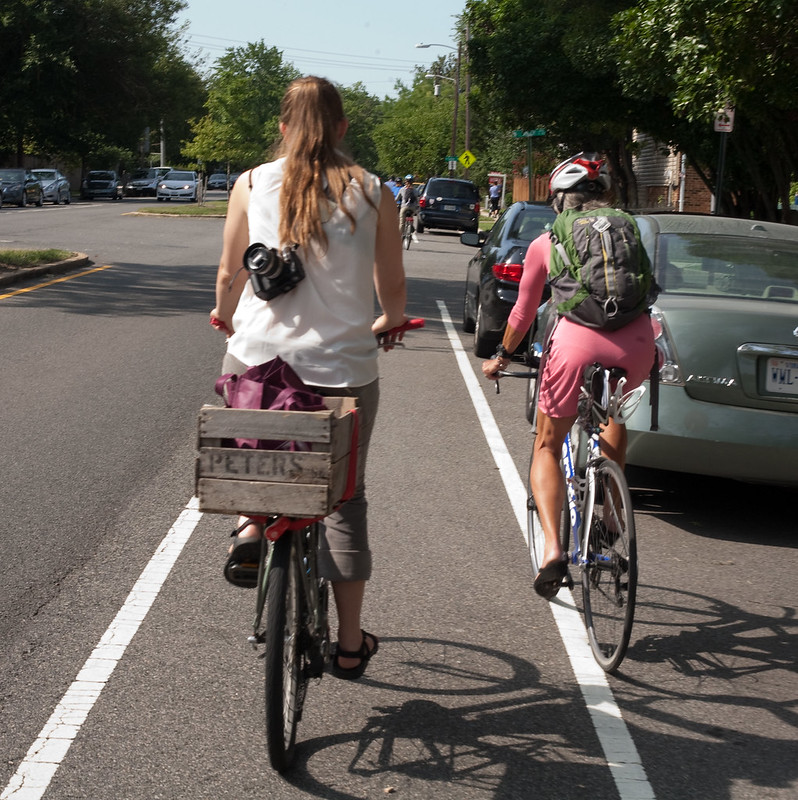 Our first stop was the GW Middle School Community Garden. The cooperative garden group’s mission is to create a thriving communal garden with high quality and fresh organic local produce. The garden has 11 large and 5 small beds for veggies and herbs and it certainly is thriving. 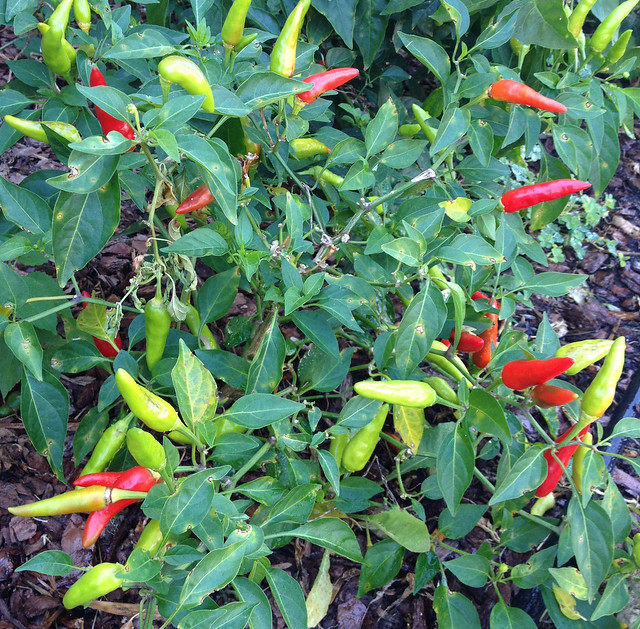 During the school year, students at GW Middle School also use the garden for educational purposes. 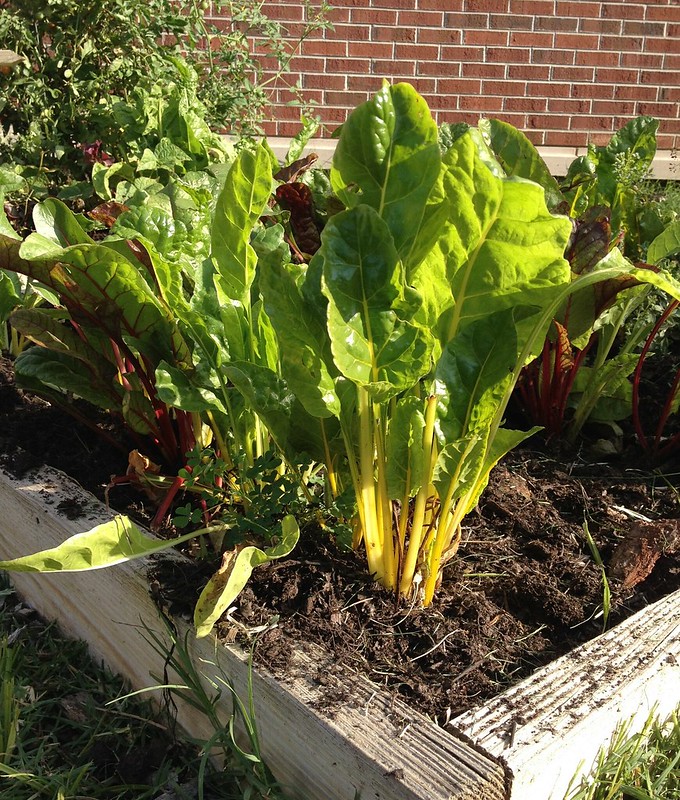 All members pay annual dues and participate in planning, mulching, prepping, growing, water, and weeding and attend group work sessions during the year. The garden is now in its fifth season and has a waiting list for participation. 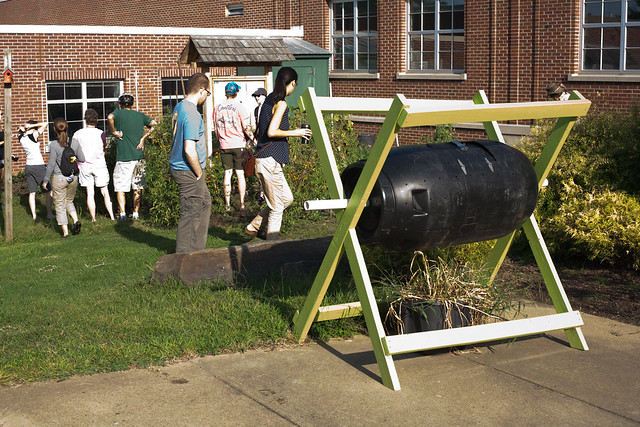 After we split into two groups, my group’s second stop was Patty’s garden. Patty (pictured below in the black tank top and skirt) has covered her entire yard with garden beds where she grows tomatoes, eggplant, peppers, corn, pole beans, carrots, lettuce, broccoli, cauliflower, blueberries, blackberries and raspberries. 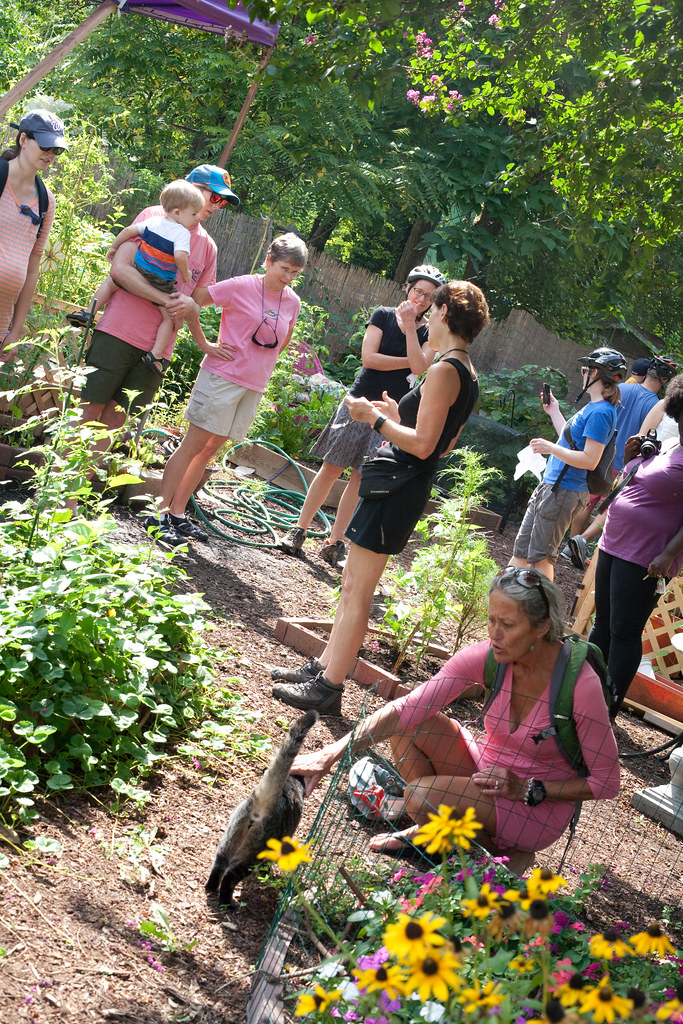 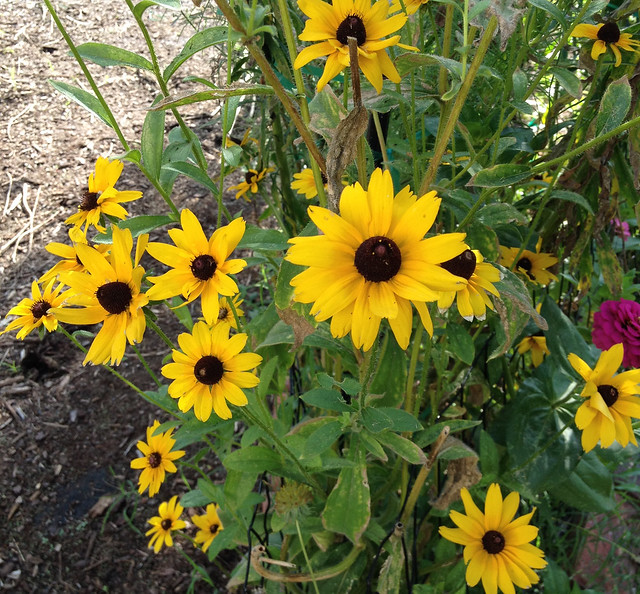 Most of the veggies and herbs in Patty’s garden are grown from seeds from Italy, including a few things that you don’t commonly see in the United States. 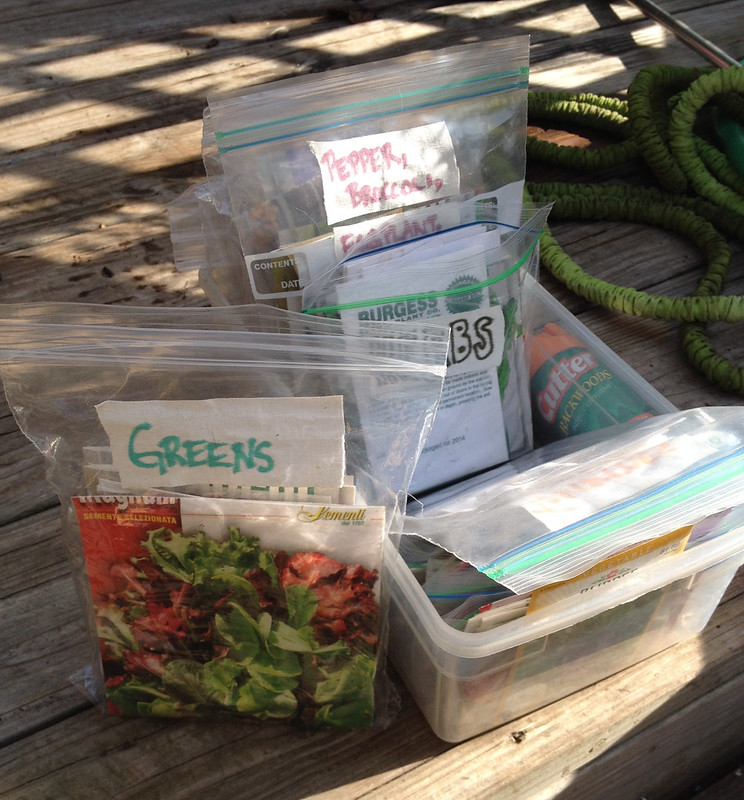 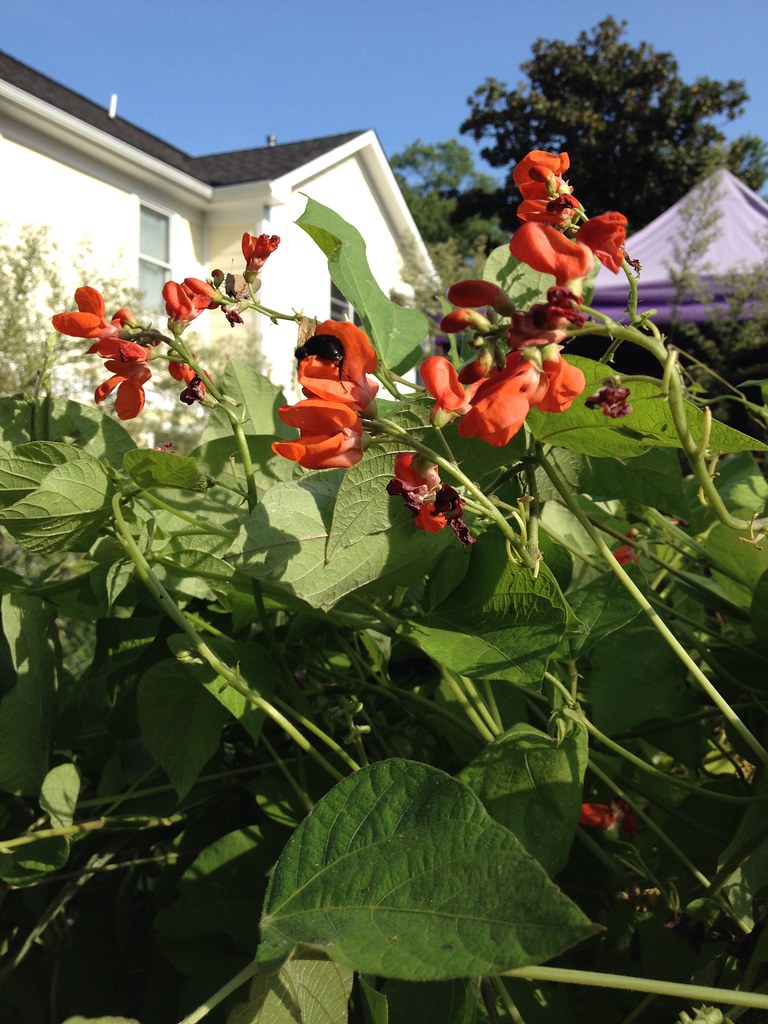 We then stopped by Jeff and Jill’s apiary which houses about 20,000 honeybees. The bees are situated behind the garage, where the hives have quiet and full Southern exposure. During the day they gather pollen around the neighborhood, approximately 66 lbs per year per hive. Jill and Jeff hired azure bee LLC to install their two hive stands and the colony – two queens in all — and train them in care and maintenance. They have already produced a beautiful honeycomb and a whole lot of the, as Jill puts it, “drippy, unctuous perfection.” 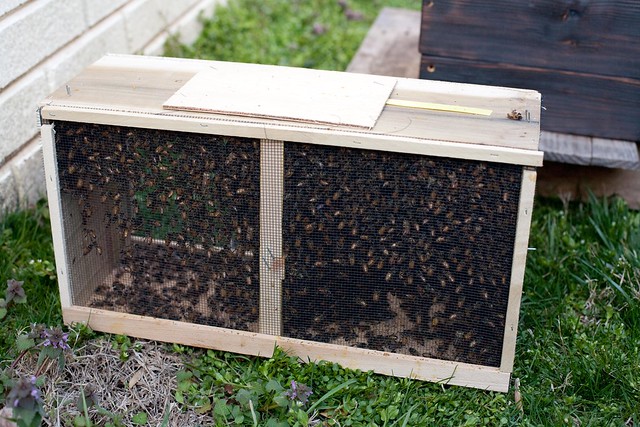 Sue and John’s curbside garden, in its second year, spans the length of their row house on a corner lot. Together with several families and friends who helped till and dig to establish the plots, they’ve all reaped the rewards of an abundant harvest of herbs, tomatoes, tomatillos, kale, eggplant, corn, romaine, strawberries, spinach, peppers, beans, peas, and cucumbers. Sue hopes she inspires others “to take over a median strip or tear up some grass to see what they can grow too.” 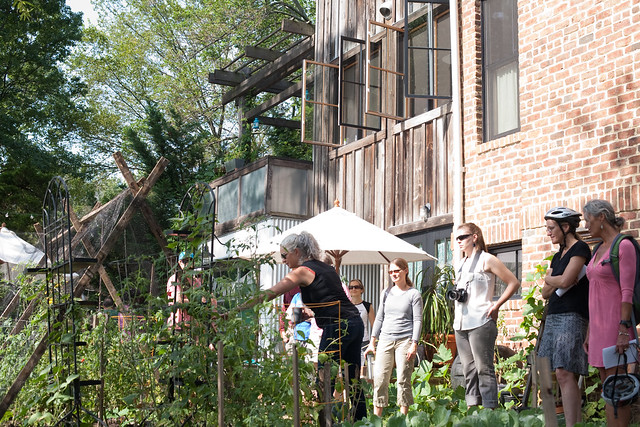 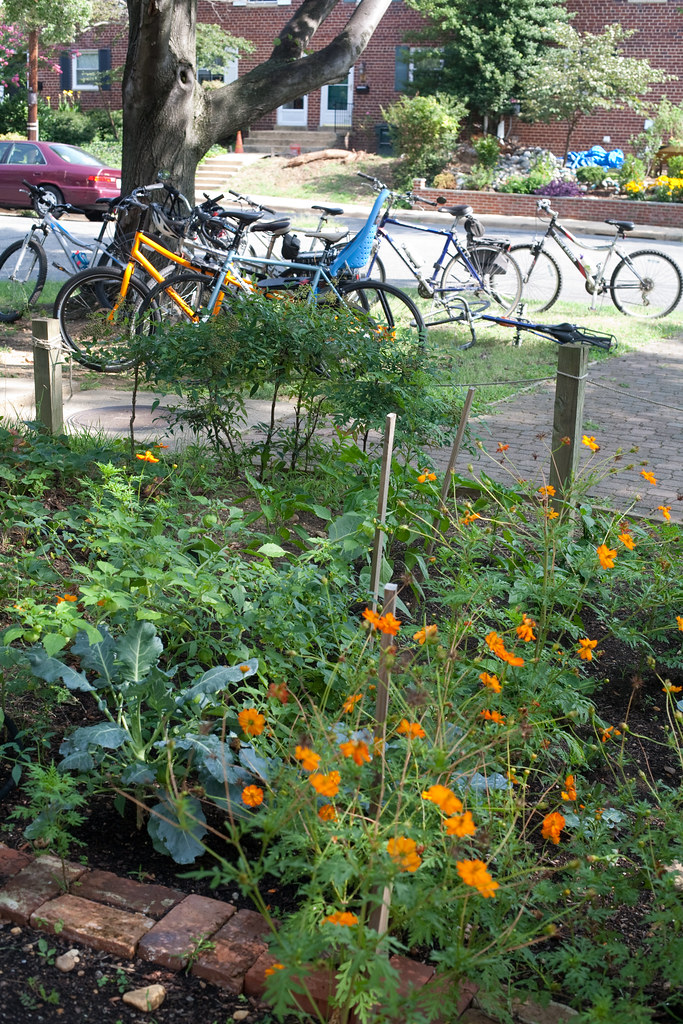 JC’s (below in the red shirt and jeans) house features a 162-square-foot raised bed garden in a central area of the backyard, a 60-square-foot pumpkin and dahlia bed and about 60 feet of asparagus against the side fence. For the asparagus, JC and her husband dug a deep trench to remove the dense clay and filled it with compost and vegetable-friendly soil. Two of the raised beds are for JC’s kids — growing edamame, tomatoes, popcorn and marigolds. They also have pumpkins and melons, five kinds of beans, half a dozen tomato varieties, leeks, cucumbers, okra and cut flowers. 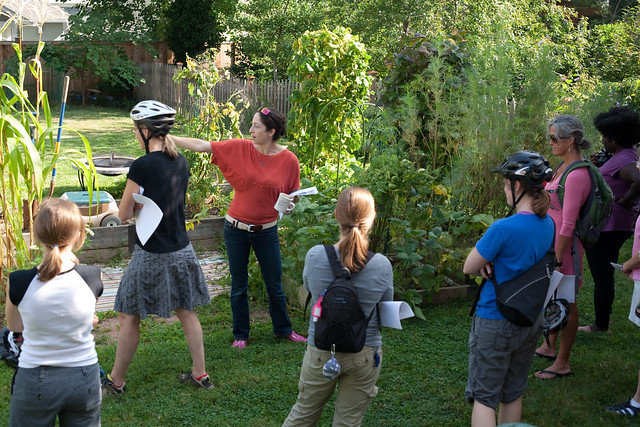 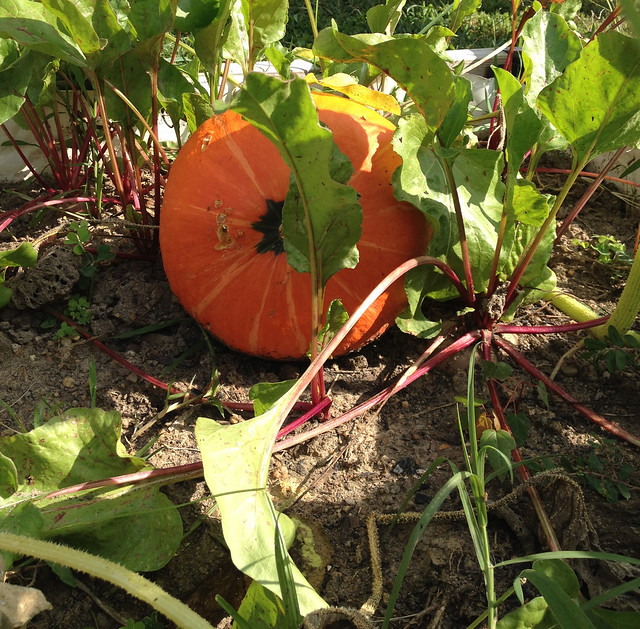 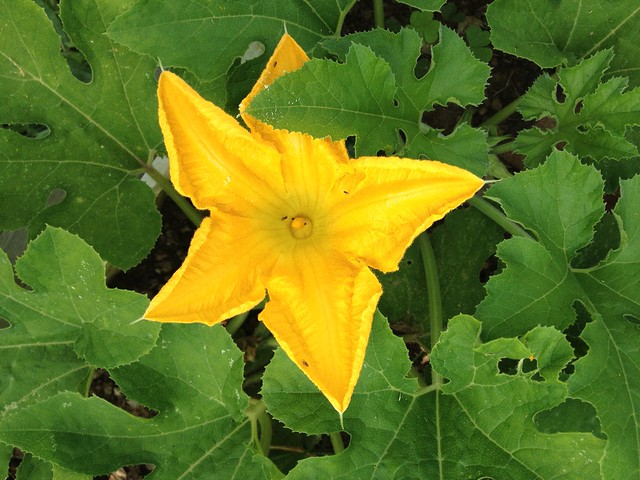 Half of the front yard is for strawberries (they make a great ground cover,  JC added) with a sour cherry tree, two fig trees, and grape vines scrambling all over the side wall. The vines actually provide much needed shade in the west-facing kitchen which suffers the brunt of the harsh afternoon sun. A new addition this year is their beehive — just like Jill and Jeff’s hives, it is home to some very docile honeybees. 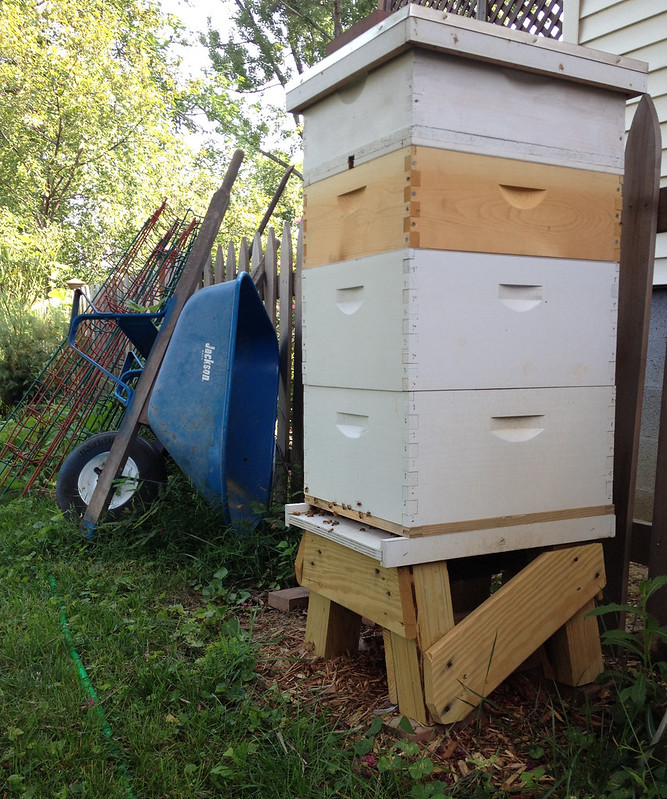 JC’s husband uses the large shed as a cross-fit gym. Dahlias and pumpkins grow along the front and a 4-foot deep concrete pad at the far back keeps the bamboo from becoming intrusive. 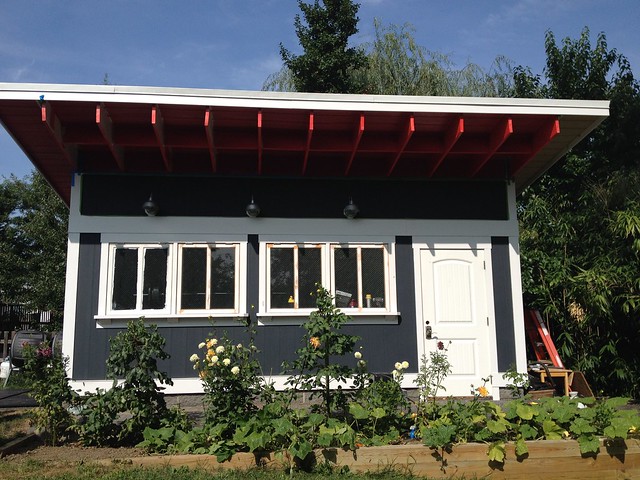 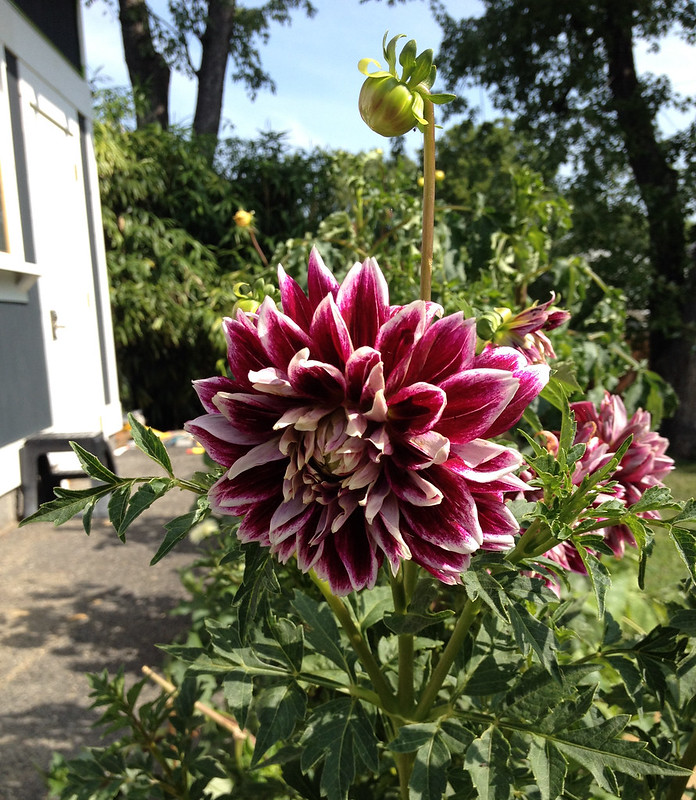 At stop six, we learned how even novice gardeners are growing food in their own backyard. Heidi always wanted a vegetable garden but needed some help getting started. She sought the advice and hands-on help of DC-based gardening company Love & Carrots — together they built raised beds against the back fence, enriched the soil, and planted all kinds of vegetables. Heidi’s vegetable garden is flourishing, with the occasional guidance from Love & Carrots on rotating the beds and on pest prevention. 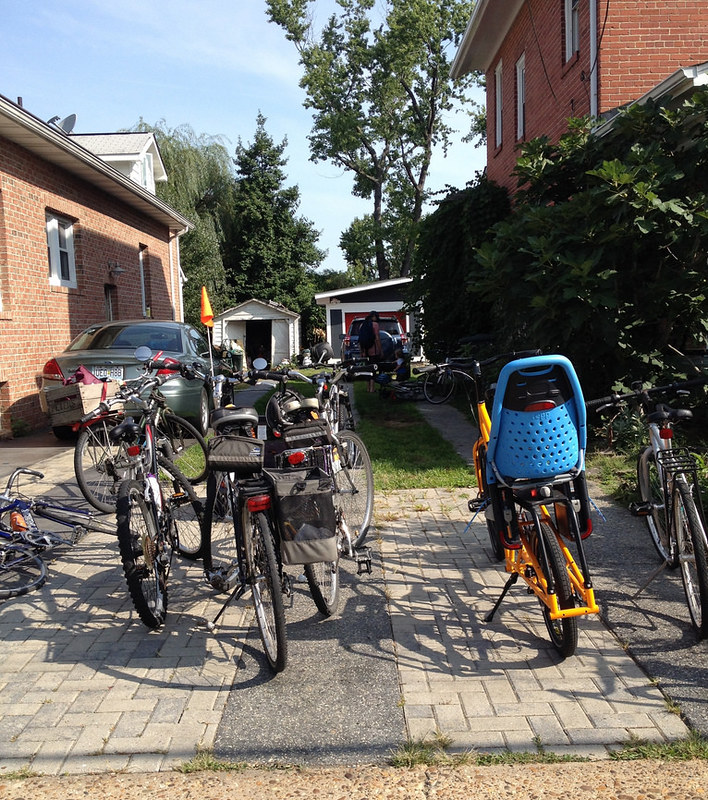 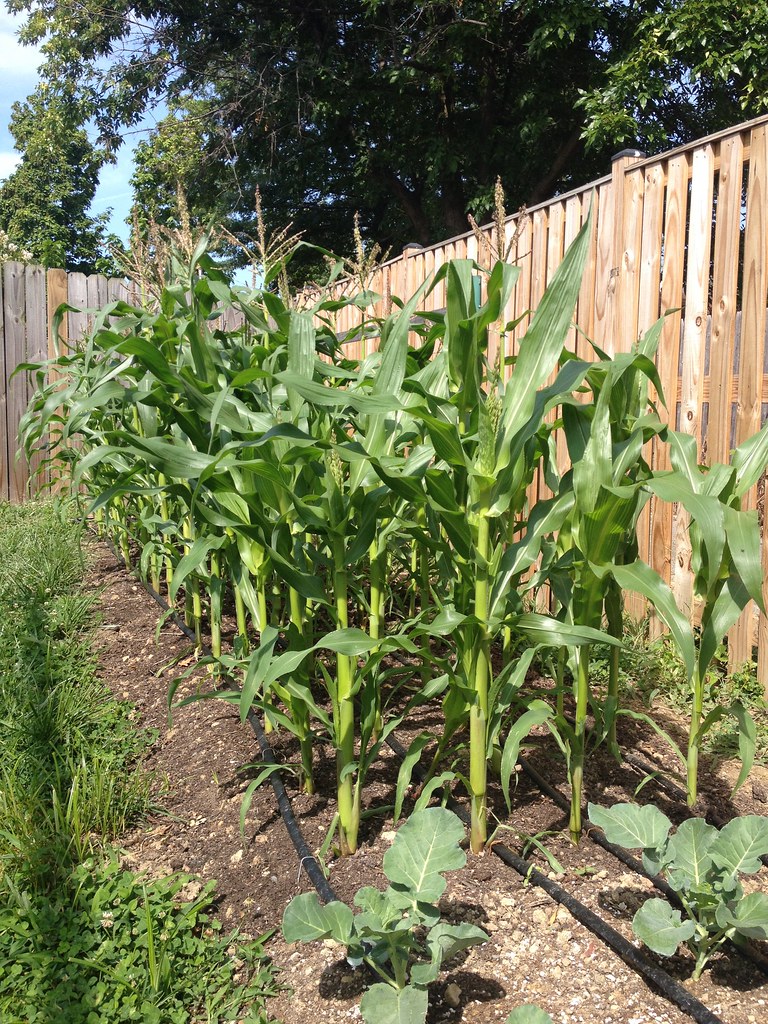 Chris pulled up a hearty handful of carrots to show everyone. 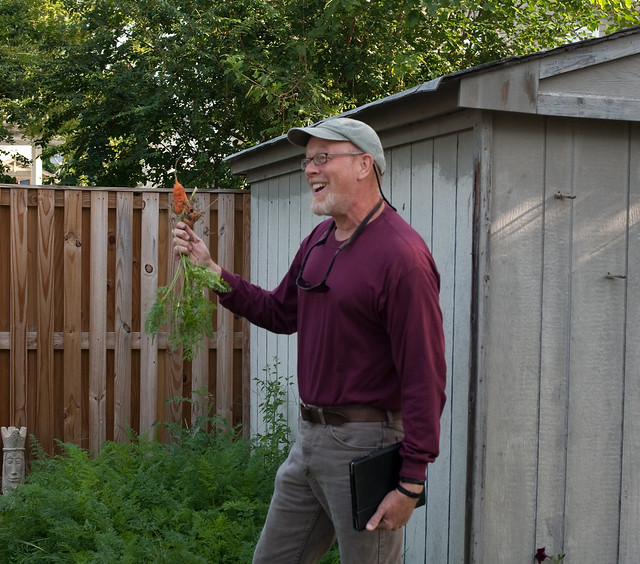 And Dan cut peppers which tour participants were happy to sample. 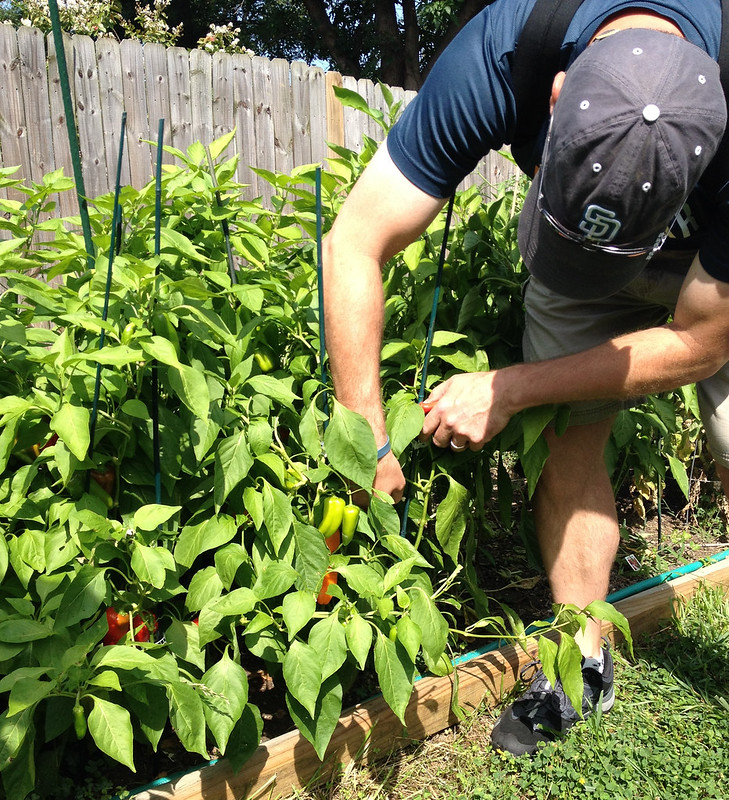 And they even have an ingenuous watering and pest control system for their tomato plants. The tubs are connected by a hose linked to their four rain barrels. When the water level is too low inside the tubs, a pump that works similar to a toilet lets more water in. Netting around the frame keeps the squirrels away. 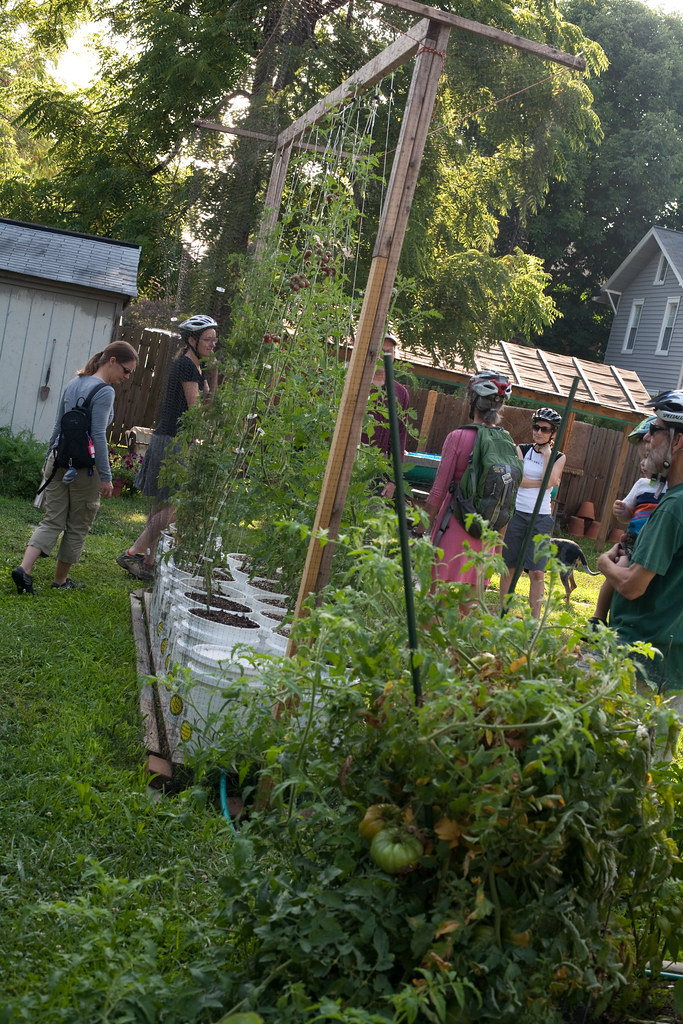 Stop seven concluded our 2 1/2 hour tour of some pretty amazing backyard gardens here in Del Ray. We’ll have more about Dan, Chris and Lucas’s garden later this week and an invitation to get involved in their forthcoming Del Ray CSA.

Our only regret with the tour is that we couldn’t include more people. However, we are planning more events like this and more urban farm tours in the future, so keep reading the blog and follow us on Facebook and Twitter for updates.