The Making of a Business: Acme Mid-Century + Modern

Not everyone has the opportunity to turn a hobby or passion into a career, but Pierre Paret has done just that. What started as a collection of mid-century modern furniture and accessories for his home is now a bricks and mortar shop in the heart of Old Town, Acme Mid-Century + Modern. 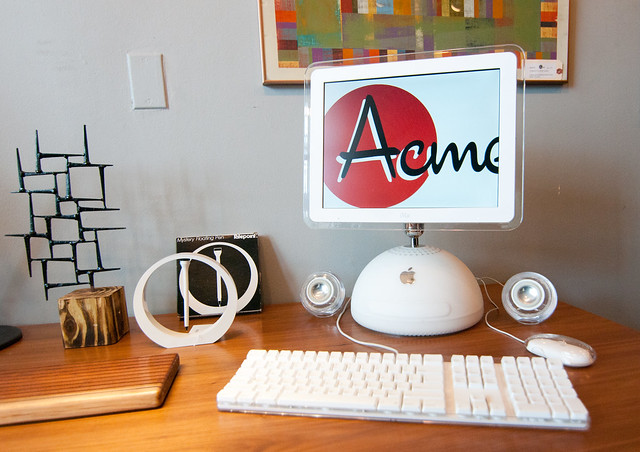 The story of how Pierre got to this point dates back five years when he took a risk and decided to start selling pieces of his collection at a small dealer booth in the basement of Potomac West Antiques in Del Ray. 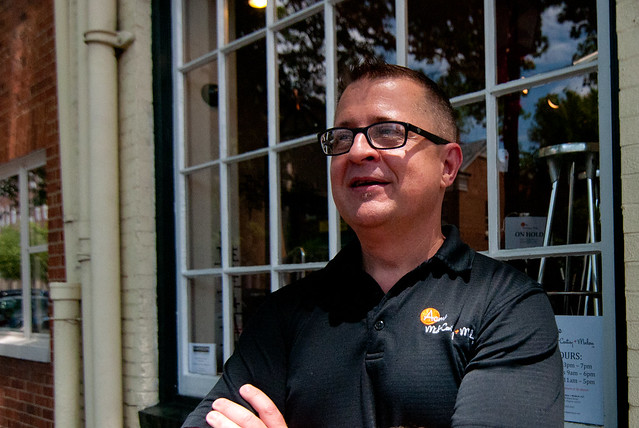 He was making a decent amount of money at the beginning, but once he was given the chance to display his pieces in the front window, people really started to take notice and sales increased significantly. He was fortunate to secure a permanent spot in the window, plus space on the main floor and in the basement for his continually growing stock. 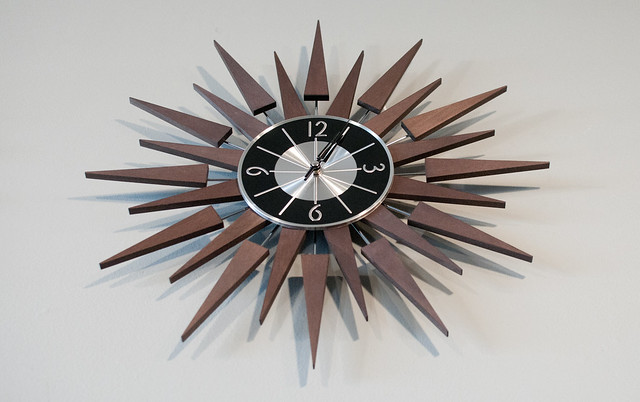 When Potomac West moved down Route 1 and became Evolution Home, Pierre followed (his booth there remains), but he also opened a small shop, about 1100 square feet, on Lee St. in Old Town. He worked out of the space for year before he decided it was just too small. In order for his business to grow, he needed a larger store.

And that leads us to present day and the opening of the newly expanded shop located at 128 S Royal St. The grand opening of this new location is this Friday, June 27, with full-fledged fanfare and ceremonial ribbon cutting. 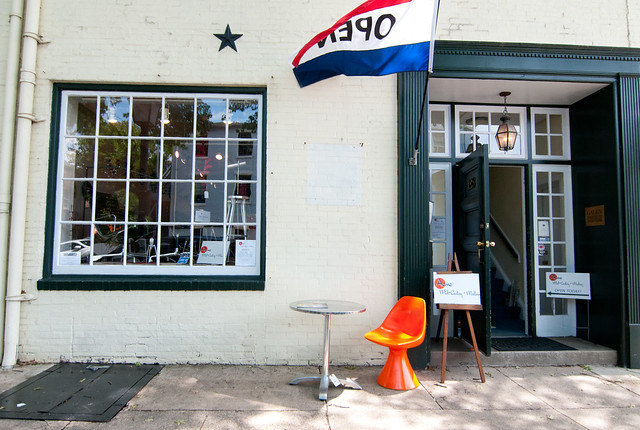 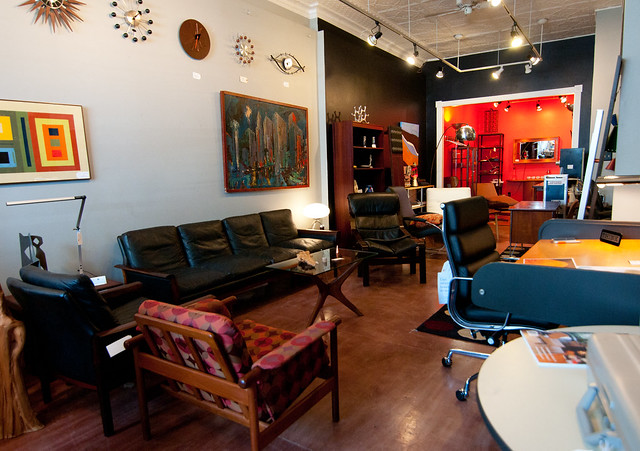 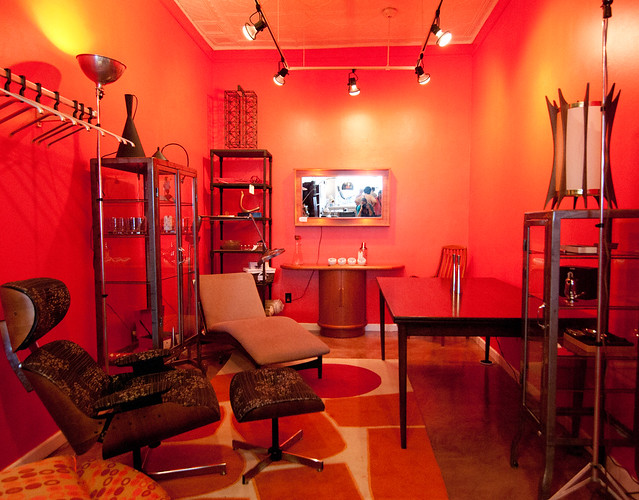 The new store is more than just a showroom of Eames chairs and relics of the atomic age, it’s also a workshop. Pierre looks for mid-century pieces anywhere he can — yard sales, estate sales, flea markets and online — and sometimes the pieces are not in the best condition. He repairs, refurbishes and restores each one and his new location has plenty of space for his furniture rehab.

Pierre also makes furniture and sculptures himself. When I visited, there was a huge slab of redwood off to the side that he was in the process of converting into a coffee table for a client. 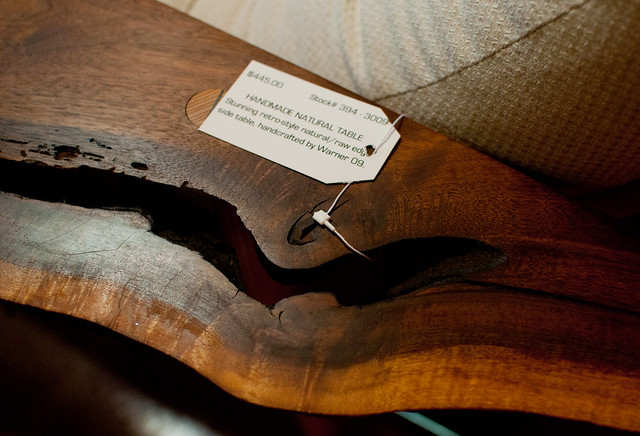 The pieces in Pierre’s collection are not all original from the 1950s and 60s — some are relatively new. He purposefully formatted his name mid-century “plus” modern so he could sell newer pieces as well. For example, some of the Eames chairs are original, but others are recent reproductions from Herman Miller. Pierre makes sure all the labels on the items clearly indicate their age and make. When he finds new merchandise, he conducts extensive research to determine its heritage — some are easy to evaluate based on tags and markings, others remain unknown to this day. 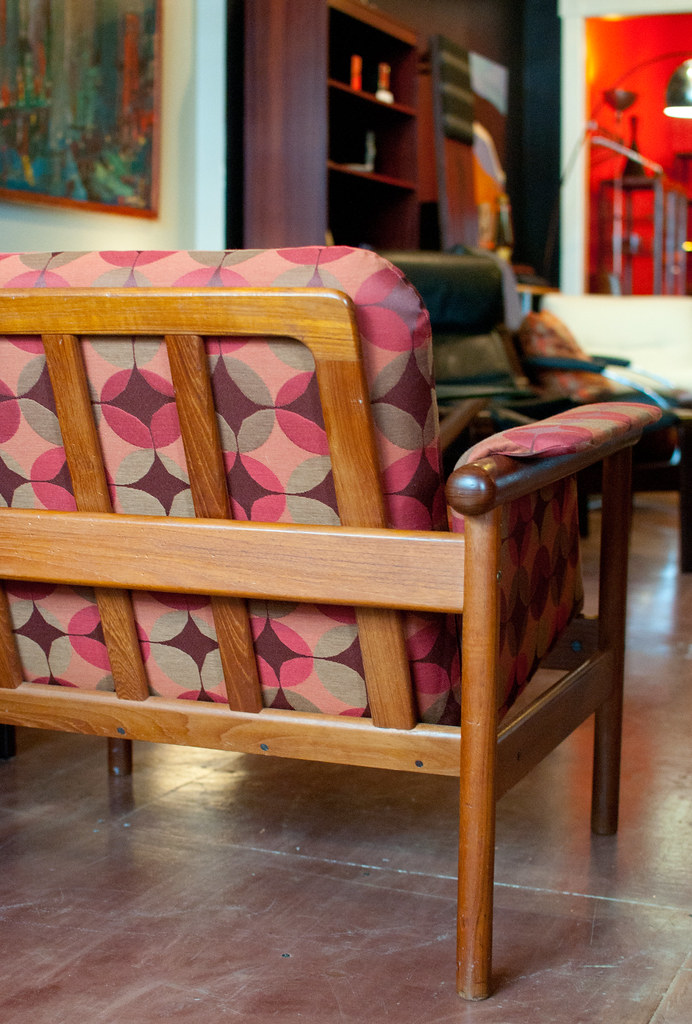 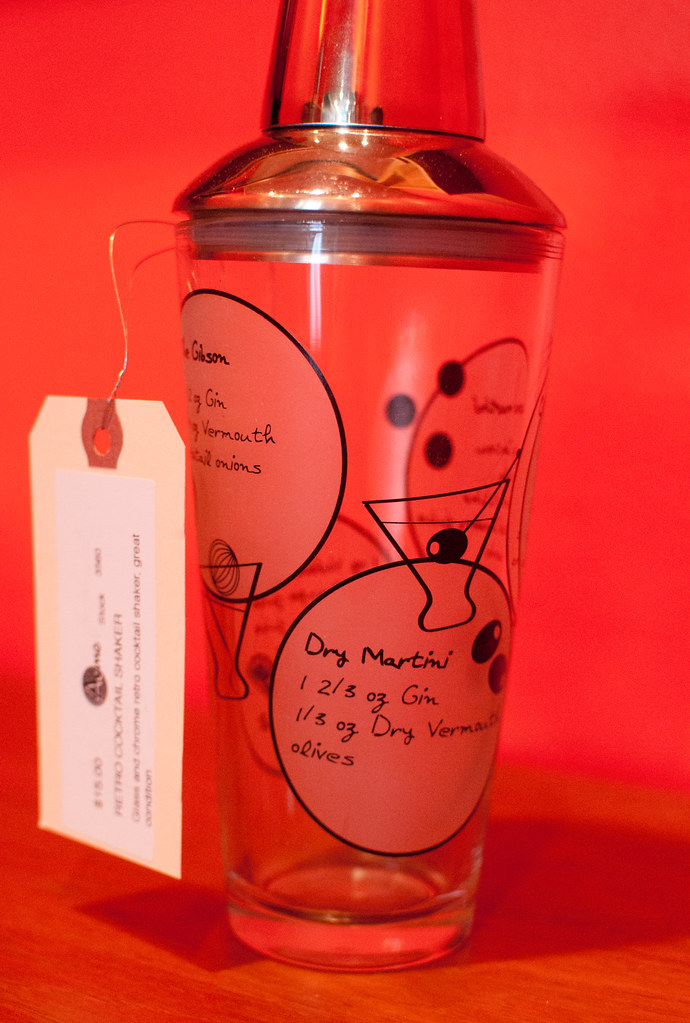 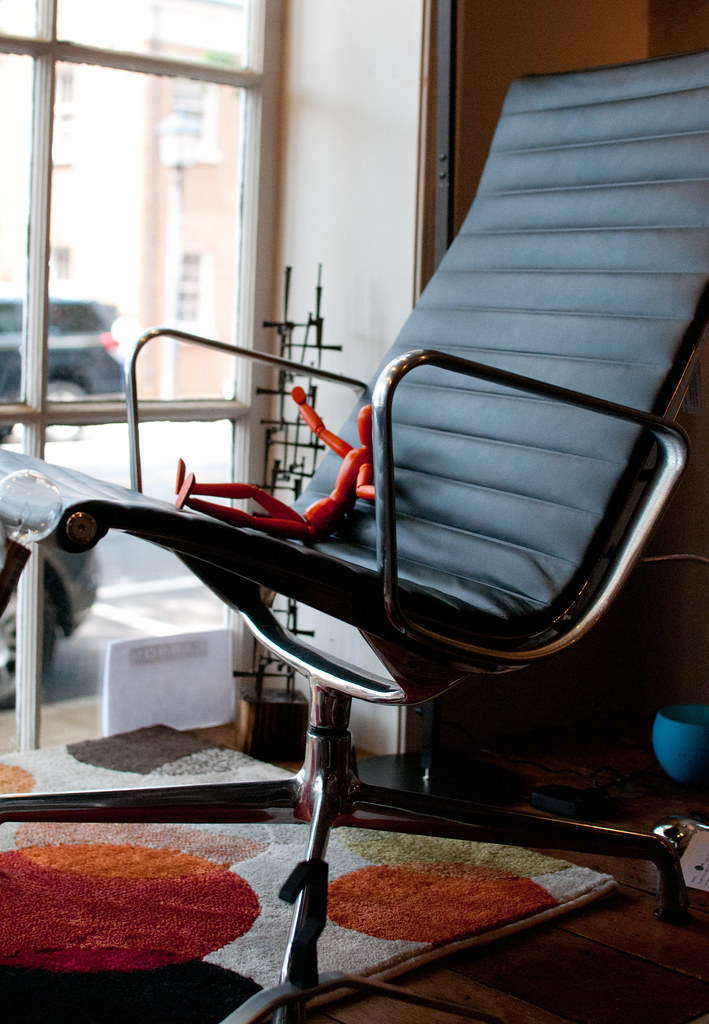 One thing he knows for certain, this sofa is 50 years old and the leather has aged so well it is oh so soft and smooth. 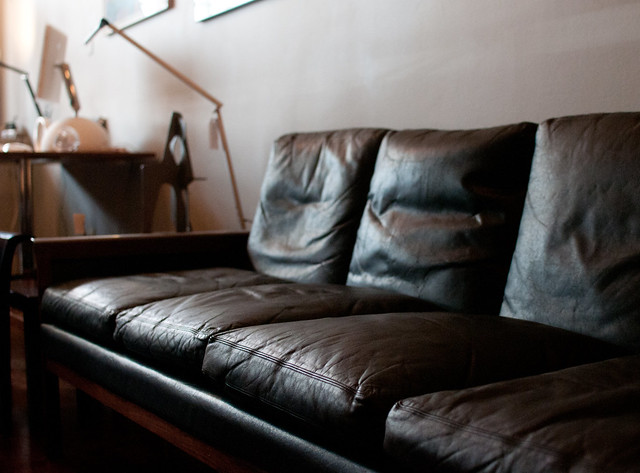 In addition to the store on Royal St. and the dealer space at Evolution Home, Pierre has four storage units where he keeps merchandise. Don’t see what you need in the showroom? Just ask and he will check the electronic inventory. If you aren’t in a rush and he doesn’t have what you need, he’ll also try to hunt it down. 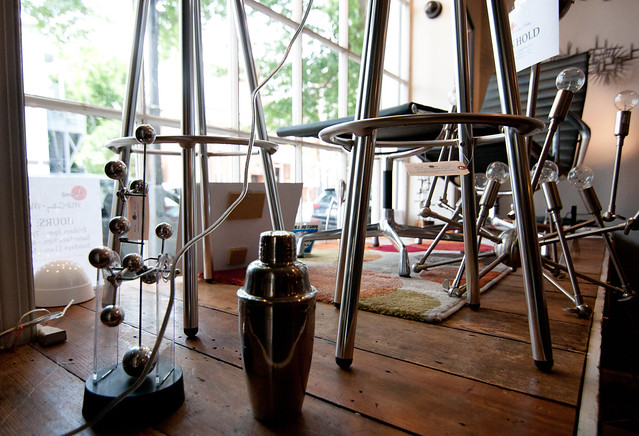 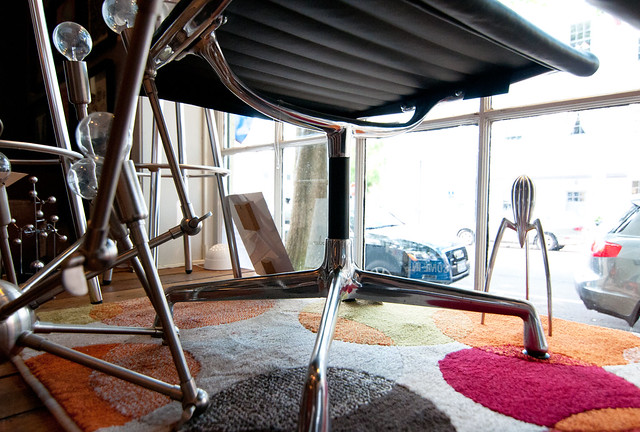 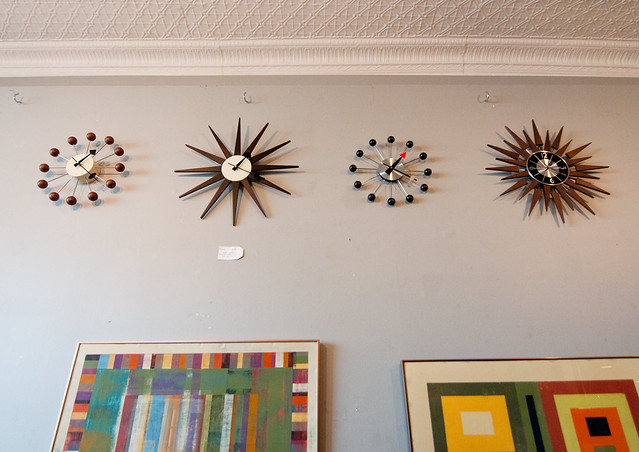 One of my favorite items in the store has to be the set of airline beverage and trash carts. How fun would it be to invite guests over and wheel an old airline cart to them and ask for their order. A perfect small-space solution for a bar cart, I must add. 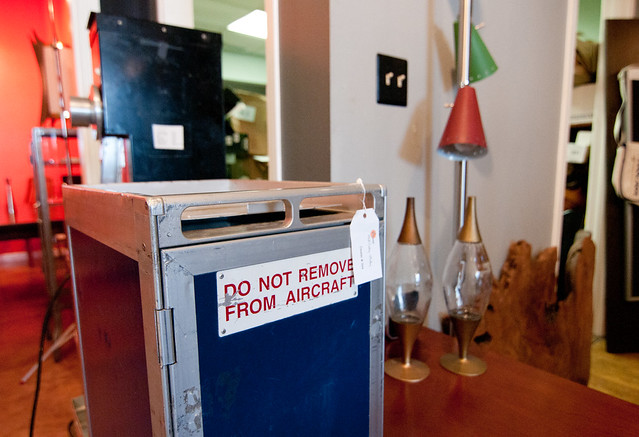 Best of luck to you Pierre as you open the new shop! For more information, check out his website where you can also sign up for his newsletter and follow his mid-century adventures on Facebook. 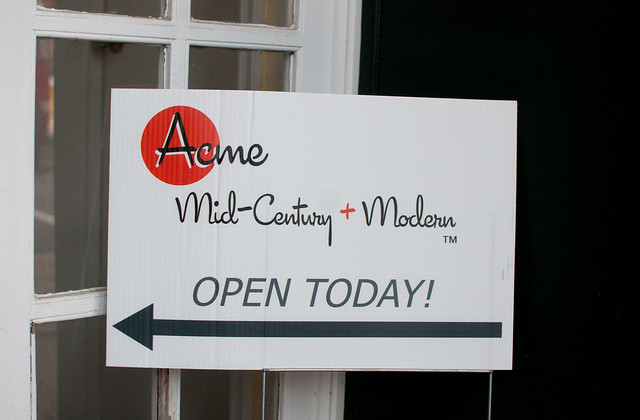